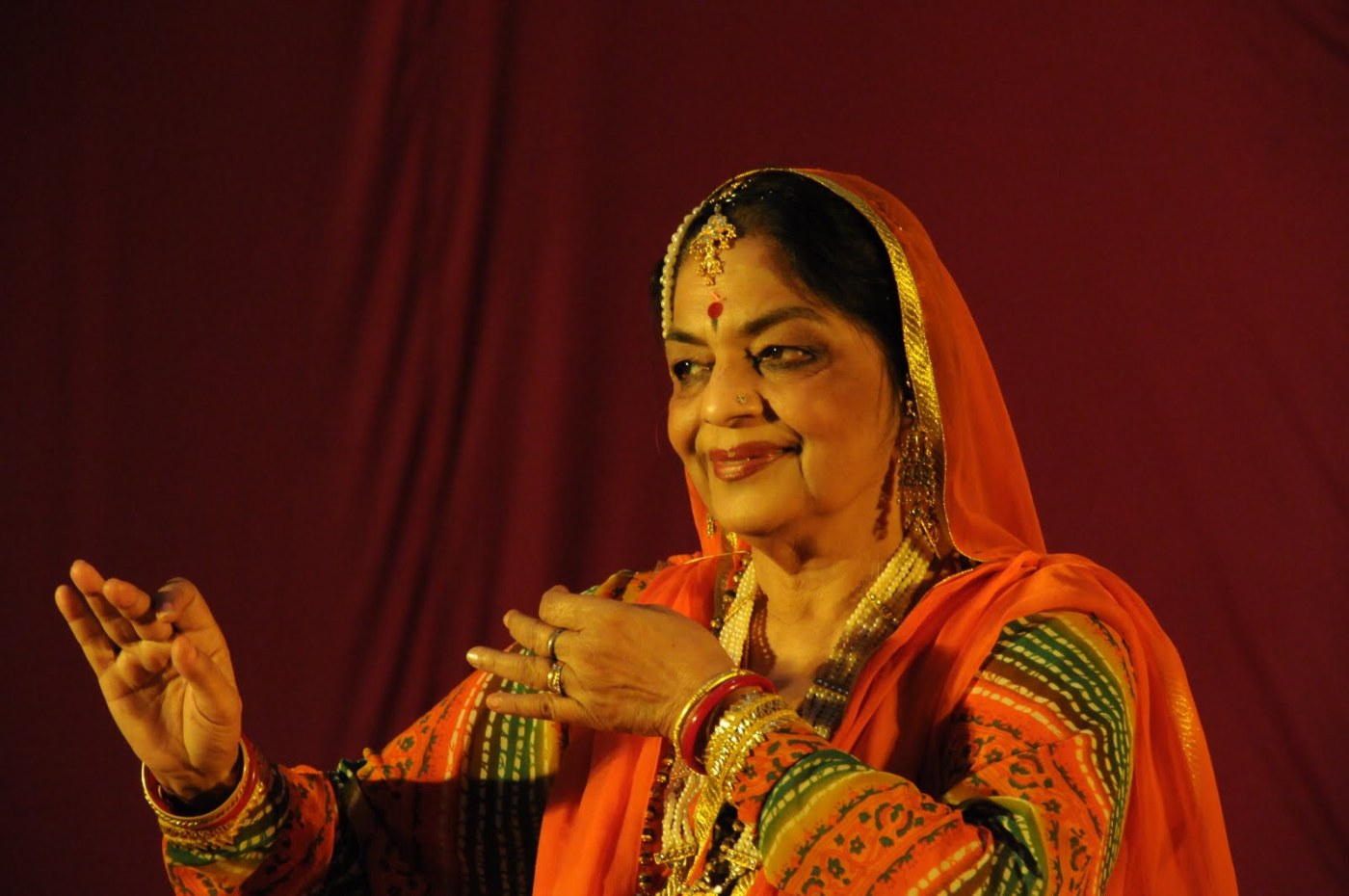 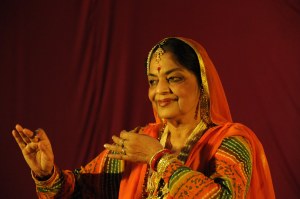 As a child, Padmabhushan Uma Sharma used to be invited to perform at the birthday functions of Pandit Jawaharlal Nehru. She went on performing for all from luminiaries like the Shah of Iran and Queen Elizabeth to commoners like you and me. The Virasat Series of SPIC MACAY was a chance to see her live.

The wait ended. Umpretencious in her walk, with a smile radaiting from her face, Uma Sharma entered the hall and greeted the audience with folded hands. Her accompanists were ready on the tanpura, tabla and sitar. A mike was palced in front of her. Surprised, I looked on. It was a dance recital and the dancer asked for a mike to be placed in front of her throughout the concert. Finally the performance began with a Ganesh bhajan. Recollecting her old times, Umaji paid rich tributes to her gurus Pt. Sunder Prasad, who taught her the rhythmic permutations of foot work and Pt. Shambhu Maharaj, from whom she understood the real idea behind Abhinaya and its importance in performance.

The following two performances were tributes to these maestros and she began a delightful series of sawal-jawab with the tabla giving her company. Sawal-jawab is the series of rhythmic repartees that go on between the dancer and the tabla player. Perfect respect for each other’s territory and knowledge goes hand in hand with putting forward impossible tasks in rhythmic expressions. As she concluded the repartees, she fondly recounted her associations with some greats of classical music and many accompanists who made her performances a wonderful experience while emphasising the chemistry a dancer requires with the accompanying artists. Smt. Sharma seemed to be loving the whole experience. Her joy, be it in dancing or interacting with the audience, was reflecting in the ease with which she moved around the stage, not shedding her grace even for a moment.

The performance continued with a chapter from the Aaranya kand of the Ram Charit Manas. Taking control of the mike, Uma Sharma sketched the epic before our eyes and began her performance after a vivid description. A performing artist seamlessly shifts between characters. In one moment she bloomed like a flower while enacting Sita and in the other she wore a wicked face protraying Soorpanaka. She brought out the valour of Ram, the anger of Lakshman and the arrogance of Ravana; all emanated withing gaps of a moment from her. Like the breeze of the spring, she panced about the stage, enticing Sita and the viewers alike, as the golden deer and ended it up with Ram rushing after it to assuage Sita.

Before the performance was brought to a close after a second round of Sawal Jawab, Uma Sharma presented the Nari bhed. Nari Bhed is about the universal theme of passion of a woman. The woman, though artistically related to a gopi pining for the arrival of Krishna, could be any woman. She gets her hair done immaculately, wears the finest garments and bedecks herself with the best of jewels. Her facial make-up goes into every detail to highlight her features and she adds charm to her body with the most fragrant jasmines and roses. Her long wait gets over only when the dawn is about to break. Her lover finally arrives, ironically not much to her glee. His undone clothes and nail-marks on his chest reveal the other woman who got the time of his night. Heart-broken and furious she destroys all her efforts and leaves herself dishellved to express her anger.

The audience broke into an applause and gave Uma Sharma a standing ovation for a minute. After bowing before the audience, she took leave and moved towards the green room. I went and stood at the entrance yet again, this time gaining some luck. With a smile, she was accepting all the verbal accolades flowing in, as she was untying her ghunghroos. As she sipped some water, I chipped in to talk about guru-shishya parampara – the pillar of strength of Indian classical dance and music.

“What parampara? Who is bothered about the relationship with the guru? It’s all gone…” she said waving her hand backwards carelessly “Just gone…”

Her accompanists informed her of the cab that was ready for her, spurring me to spell out some haphazardly collected questions in the last two minutes left to me. “Umaji dance is a part of the Bombay film industry. What do you think of the dancers there?”

Her facial contortions to the question gave me an impression that she was indeed bitter about the dancers of the film industry. “What dance? You know what is happening” she blurted “There was a time when a danseuse like Sitara Devi shone on the screen. Then came dancers like Vyjayantimala and Waheeda Rehman. Look at her dances in Guide! She looks marvellous. See Rekha in Umrao Jaan. She just sparkles in the mujras. They were trained dancers, who stepped into acting. Unlike what is happening today. Dance has lost its sanctity in films. And on top of that you talk of guru-shishya parampara!”. She took a pause and mused for a while. “ It’s all gone!” she lamented.

She stood up, ready to leave. “So is there no hope that you see?” I asked as she posed with the fans for a last-minute photograph. She turned to me and said “Times are changing. What happened 100 years back cannot happen now. There are a few people trying to keep things alive. My own dance school is fighting these changing trends to maintain some sanctity in art. I have tried to pass on to my students whatever I learnt from my gurus. At least there is interest in the art. But let us see how things turn up.”

She walked away and I stood there looking at the magical trail she left behind. There cannot be a certain answer to a question which poses the picture of uncertainty. Time, as they say, is the best person to answer it and for it to answer, we have to move with the times. Uma Sharma also perhaps knows it too well.

(This article was published in The New Sunday Express)

One thought on “Disarming with her tales”