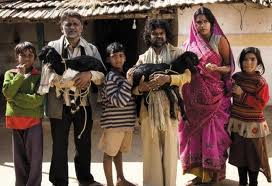 Peepli Live has been declared India’s official entry for the Academy Awards. A dark comedy on India’s dark underbelly, Peepli Live opened to rave reviews and was a runaway success at the box office. Many have criticized its simplistic approach taken to portray farmers’ suicides. But the fact is that the audience gulping down litres of cola and burger have lauded a movie telling a tale about unfamiliar people. After all, Peepli Live, which laughs at anything from suicides to open toilets, shows an India which is unknown to people like you and me – the English speaking classes of India.
Movies on rural India were not uncommon till the 1970s. In the 1930s and 40s, strong movies were often not let through the vigilant eyes of the British Censor Board. Yet, we had movies like Mehboob Khan’s Aurat, which is still remembered for some of the ghazals sung by Begum Akhtar. When Independence came, filmmakers gained more independence and they started getting wider exposure to works of foreign filmmakers. Vittorio De Sica’s Bicycle Thieves created a renaissance in India. On his return trip from Europe in the 1950s, Satyajit Ray started writing the script of Pather Panchali and Bimal Roy came up with Do Bigha Zameen, which marked the beginning of neo-realism in Indian cinema. Do Bigha Zameen was not a blockbuster in the conventional sense. Written by the staunch Communist Salil Chaudhary, it was showing something unknown for Do Bigha Zameen was as much about rural poverty as it was about urban poverty. It was a bold take on industrialisation in a new India.
This question popped its head once again in B.R.Chopra’s Naya Daur (1957). Prior to its release, its script was written off by all as one suited for a documentary. Even the likes of V.Shantaram and Mehboob Khan refused to be a part of it. B.R.Chopra decided to direct the movie himself and roped in Dilip Kumar. In a quasi-Luddite drama, the movie raised serious questions about blind and uncalculated industrialisation of a nation, which was yet to be prepared for its after-effects. The man versus machine drama celebrated its silver jubilee simultaneously in two theatres in Bombay. In 1957 came what can be called India’s answer to Hollywood’s Gone with the Wind. Mehboob Khan’s rural epic Mother India swept the masses off their feet and was a soaring success at the box office, inspiring the most successful melodramas of the 1970s and 80s. Mother India was India’s ultimate rural saga, which talked of all the problems faced in rural India. It was a tribute to the stoicism of this India and its ability to bounce back after every disaster time and again over the ages. Lecherous moneylenders, floods, hunger, overpopulation were recurring themes in this movie.

A classic dacoit drama – Gunga Jamuna
The Fabian socialism of Nehru found resonance in all these works. There was a sense of shared optimism in the aftermath of independence or one may say that independence in itself was seen as a cure for all ills that ailed the nation. In this scenario, Dilip Kumar raised serious questions of rehabilitation and rural crime in Gunga Jumna. The film was seen to be so sensitive that it was passed by the Censor Board with as many as hundred cuts! When it was finally released, it brought out the familiar tale of two brothers on opposite sides of the law.
After Nehru, Lal bahadur Shastri filled the nation with a renewed sense of pride and hope. Manoj Kumar became the new poster boy of cinematic patriotism. In a more commercial avatar, he brought back the question of rural-urban migration in his classic Upkar. But by now, rural India in cinema seemed to be filled with glamour and kitsch. It became the backdrop for romance and action ala Mera Gaon Mera Desh, Sholay and Nadiya Ke Paar. Slowly it was out of mainstream commercial cinema. 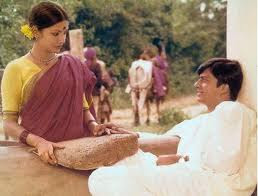 The seedling of a revolution -Ankur

It took the courage of Shyam Benegal, who along with M.S.Sathyu, gave an alternative voice to cinema. Ankur, the first in his rural trilogy, was a declaration of a revolution which was to begin on screen. He followed it up with the success story of the white revolution in Manthan and another searing rural saga Nishant. Manthan, produced by 5 lakh dairy farmers of Anand, was a coming-of-age movie about a silent bloodless revolution which would slowly change the rural landscape. It was not high on cinematic emotions like Upkar but was steeped in realism.
The idiom of cinema had changed by the 1980s. The industry had been corrupted and was slowly getting creatively bankrupt. Garish buffoonery was passed off as cinema. But creative juices from parallel cinema continued to flow. Rural poverty pushed the farmers to quit farming and become labourers in dust of cement and smoke in urban factories, forcing them to live in inhabitable urban slums. The natural progression was to focus on the lives of these farmers living in urban India. Sudhir Mishra’s Dharavi, Mira Nair’s Salam Bombay and Goutam Ghose’s Paar looked into the lives of those who cleaned the dirt of urban India. In the nineties, the village was used as a glycerine to evoke the patriotic sentiments of a long gone NRI. Hence you had the colourful villages of DDLJ, Pardes and Veer Zaara, where people in the hinterlands did nothing but wear colourful clothes, dance and make merry. The Indian gaon was an exotic treat to the newly opened market abroad.

The change came with Ashutosh Gowariker’s Lagaan. Though it is remembered as a movie which made the marriage of cricket and cinema possible, Lagaan, within the constraints of cinematic fantasies, sketched a long-forgotten rural landscape. It had not just folk music and festivals, but also casteism, illeteracy, hunger and poverty. Three years later Gowariker brought back the problems raised in Lagaan in the context of modern India with the solution-seeking eyes of Shahrukh Khan’s Mohan Bhargav in Swades. Swades was in many ways a story of self-empowerment ala Manthan and was a reminder of the fact that even after 60 years of independence, certain parts of India remained unchanged. A journalist in Peepli Live says “Half of India still defecates in the open. We should make this a breaking news story”. Perhaps this is our tragedy. A reality check is past its date.

4 thoughts on “The saga of rural sagas”