The 60 hours that passed when the city of Mumbai was held to ransom was unprecedented in the 60 years of the nation’s history and the financial nerve of the nation almost broke down. Commentators have called this India’s 9/11. It is another matter that hundreds of districts are still held to ransom by the Naxals. But that, of course, is a different story. Nevertheless, every disaster tells a story. 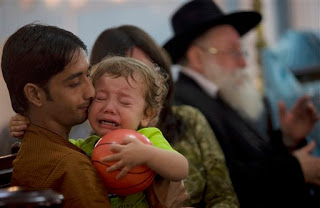 Loss of innocence before it is born
A few images of the blasts have led many of us wondering about the irony of life. The attacks took place in the imperial interiors of the likes of the Taj and the Oberoi. Many of those who died there were some of men of deep pockets. Andreas Liveras was a Greek Millionaire who owned several luxury yachts. He arrived at the Taj to have some dinner but reached his nemesis. Many hoteliers saw the last day of their life and no amount of wealth could save those were trapped inside. They kept staring at the pounds and dollars which could be of no use at this hour of crisis.
Places like hospitals were one’s wounds are attended to have been targeted. But then, which place on earth can be safe? When the stated hour has come, death is bound to happen no matter where one is. This may be fatalism. But this is also the fact. What drew some to the points of attack at the fateful hour while many left the place just minutes before the attack?
I wonder what would define the photo essay of the blasts. The starting point would be the picture of Taj in a cloud of orange flames. The second picture would be of the irresolute Shivraj Patil addressing the media, for both became the paragons of recklessness. The third would be the picture of hostages rushing out, their tense bodies fleeing out with their faces laced with traces of the joy of liberation and their eyes still engulfed in the trauma of the past 3 days. The fourth would be a picture of an unknown millionaire, whose body is lying unattended among the heap of many others, many being the waiters in the hotels. Death has played a leveller here, leaving no difference between the two. The fifth would be the funerals of our officers who gave their lives on duty, as their inconsolable relations stand devastated yet dignified before the national guards. The penultimate one would be the face of the two-year old Israeli boy Moshe, whose pictures showed him sobbing uncontrollably, clinging on to the ball of innocence in his hands. This would perhaps be the most heart-wrenching of all as it speaks for the hundreds who were injured for life, traumatised or dead in the attacks. Their future has become a game of ball and their life has become the result of a petrifying game of terror.

Devastated yet Dignified
But the final one would be the image of workers repairing the damaged structures as the pigeons take flight for yet another day; traumatised, yet holding on to the hope for a better day ahead for it is this hope that they live by. Life moves on and like those of the pigeons. Man also returns to roost in the evening and ponder. What was this all about? Was this the end or was it the beginning of the end? On a rethink, should I end the essay with the images showing South Mumbaikars protesting against the Politicians? But then, these are people who have played little role in the politics of our nation. South Mumbai has a grand turnout of 40% during the polls. I leave that image to display hypocrisy, rather than conviction.