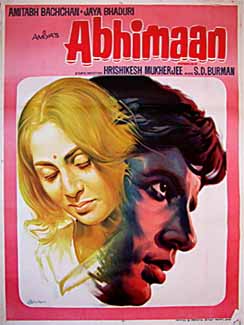 “Simple emotions are difficult to create” Hrishikesh Mukherjee once said in an interview. But that was simply what he dished out time and again to his viewers. Right from Musafir and Anari to Golmaal and Khoobsurat, he touched the lives of one and all, with the focus on what has almost disappeared from the silver screen – middle class mannerisms. The year 1973 changed Amitabh’s fortunes in more ways than one. This was the year when Prakash Mehra’s Zanjeer got released, making him the Angry Young Man of Hindi cinema. This was also the year, he got married to Jaya Bachchan while shooting for Hrishikesh Mukherjee’s story of marital discord – Abhimaan. To start with, this is among my all time favourites. I watched it as a kid with my parents on tv and have watched it innumerable times later, so much so that I remember even the background score of this film.
Abhimaan is the story of a singing sensation Subir Kumar (Amitabh), who is at the peak of success, glamour and stardom. His friend and PA Chandru (Asrani), manages all his affairs. On a visit to his aunt’s (Durga Khote) village, he meets his neighbour Uma (Jaya), who has grown up worshipping music, much like her father (A.K.Hangal). Subir and Uma get married and they are welcomed at their home in Bombay with pomp and fair. Subir decides to sing thereafter with Uma – a gross mistake as observed by Rai sahab (David), a classical musician, who feels that Uma’s talent would eventually overshadow that of Subir. His fear turns true, slowly but steadily and with it, the growing sense of insecurity in Subir’s mind. Offers start pouring in for Uma and her songs rock the charts at Binaca Geetmala. The producers even agree to pay her a fee higher than that of Subir. Subir takes to liquor and seeks solace in the dwelling of his friend and silent lover Chitra (Bindu), who tries to bring them together. Uma, unable to bear the silent and sarcastic verbal assaults of Subir, returns to her village. She soon delivers a still-born baby and suffers from a serious shock. A penitent Subir, after being chided by his aunt, brings Uma back to Bombay. All his efforts to bring her out of shock fail. The moment of catharsis for Uma comes when he sings a song on stage, which was more of a dream they had seen together and which got shattered before their very eyes. 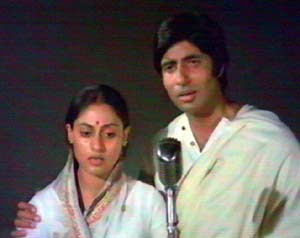 Abhimaan talks of a theme, which has seldom been talked of with subtlety on the silver screen – male ego suffering a jolt due to the rise of his spouse. The slow build-up of insecurity in Subir was handled in a very nuanced manner. The songs by S.D.Burman are used excellently to show the progress of the story. Meet na mila is a portrayal of the jovial but lonely life that Subir leads. If Uma’s Nadiya Kinare is a sign of them coming together, then the reception song Teri Bindiya re and Lute koi Man ka nagar brim with coquetry  and romance of a newly married couple. The two studio numbers- Ab toh hai tumse and Piya bina -shown as moments of fame of Uma, capture the drift in their relationship due to her rise and his perceived fall. S.D.Burman also gave a glimpse of his Sun Mere Bandhu re (from Sujata) in one of the background tunes. The use of Tere Mere Milan ki Ye Raina on two occasions – first during the early days of their marriage and the other during the dramatic climax – is an example of how Hrishida used music as a medium of story telling in his films. While Hrishikesh Mukherjee held that Satyakam was his best film ever, Amitabh would insist that Abhimaan was his all-time great work. This film was, in some ways, Hrishida’s compensation to Amitabh, for having removed him from Guddi after a few days’ shooting. Abhimaan was based on the tragic story of a couple Hrishida knew in real life, though he never revealed as to who it was. However, rumour was that the story bore close resemblance to the lives of Kishore Kumar and his first wife, while some felt that it was linked to the failed marriage of Pandit Ravi Shankar and his supremely gifted wife Annapoorna Devi. 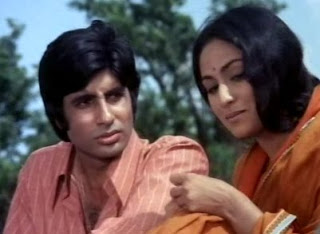 The scenes such as the one where the photographers ask Subir to move away from Uma’s frame, the one where a few fans snatch their autograph book from Subir on seeing Uma and rush to her or the one where a devastated Uma places her hands on the strings of the tanpura to stop her father from producing the strains stand out for their sheer spot on emotions. Men grow up in India with the notion that they are greater than women. This chauvinism is visible in the scene where Subir asks a producer to pay him Rs 6000 when he hears that they are willing to pay Uma Rs 5000 for a song. Even in the climax scene, where Uma breaks down while listening to Tere mere milan, Hrishida does not let the movie slip into the mode of a melodrama.
During the making of Abhimaan, Amitabh and Jaya tied the knot and Jaya chose to keep herself away from movies. Needless to say, speculations were rife that the movie mirrored their own insecurities.
Abhimaan falls in the league of the commentaries on marriage that were made in the early 1970s like Aavishkar, Kora Kaagaz, Grihapravesh and Anubhav. A glaring feature that sets Abhimaan apart is tha unlike the others which focused on the domestic confines of marriage, Abhimaan moved ahead to speak of the professional rivalry between the couple which seeps into their home.
The movie has a flirtatious charm, with its explicit and implicit layers of coquetry and poetry, like the bashful face of Uma when she sees Subir pressing his lips to indicate a kiss. But on a larger note, Abhimaan still speaks the silent and convoluted story of the male dominated society that we live in.

2 thoughts on “When the egos clashed in ABHIMAAN”