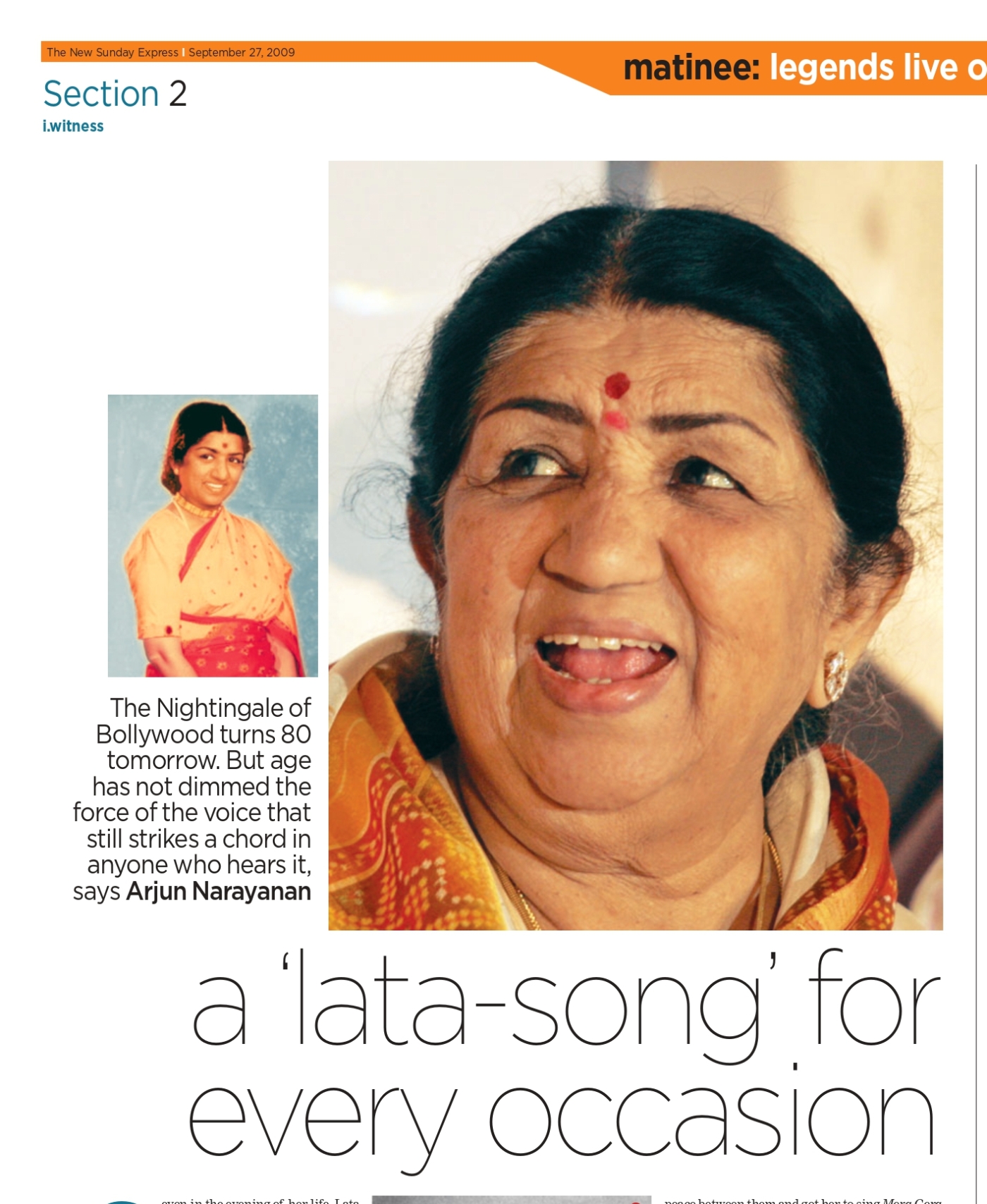 Like the morning sun, her voice embalms the mind. Like the rays piercing through the early mist, it sends a wave of energy down the spine.  Like the sounds of a temple bell at dawn, her voice rings to awaken the masses and enters our consciousness. Eighty years of music and sixty three years of career in Hindi cinema is not an easy feat and to carry on with that career with the above qualities results in a personality, whose parallel we will never see in our lifetime.

Very few people know that Lata’s real name was Hema and she chose her name from a play of her father in which she played a character called Latika. Back in the early 1940s, actresses with the ability to sing were much sought after. Lata did not like to don the greasepaint and appear in front of the camera but did that for a few Marathi films. Lata’s voice was unconventionally think and deemed unfit for playback in that era. After a lot of struggle, Lata rose to prominence dramatically in the post-independence film industry. When she got her first earnings, she bought a radio to listen to her idol K.L.Saigal. The moment she came home, she switched on the radio and heard that K.L.Saigal was no more. Saddened, she returned to the market and sold the radio.

The year 1947 saw the exit of Mallika-e-tarannum Noorjehan, who left for Pakistan after independence. With the meteoric rise in the popularity of playback singing, the days of singing stars like Uma Devi, Surendra and Suraiyya were numbered, as the playback system sabotaged their forte, which was the clever conflation of voice and looks. The year 1948 saw the breaking of convention by not just Lata, but also Mohammed Rafi, whose songs in Dulari turned out to be chartbusters. Two years of back-to-back successes in the form of Andaz, Dulari, Barsaat and Mahal ensured the arrival of Lata Mangeshkar into the Hindi music scene.

The fifties saw her competing with the likes of Shamshad Begum, Geeta Dutt and later, her own sister Asha Bhonsle. But many then believed that her true competitor was Geeta, whose sultry voice gave her a tit-for-tat at the box office. No doubt Lata had a bigger following in her kitty, with loyalists like Naushad, Shankar Jaikishan, Roshan, Madan Mohan and Salil Choudhary, for whom she recorded hit after hit. But Geeta had support from S.D.Burman and O.P.Nayyar, with the latter never having recorded a single song with Lata for reasons known only to them. With Geeta and Shamshad Begum falling silent in the sixties, Lata, along with her sister Asha dominated the film music scenario for the next three decades.

This era saw many controversies engulfing her. She never recorded a song with O.P.Nayyar. She fell off with C.Ramachandra, returning only to record the unforgettable Ae mere watan ke logon. She stopped recording songs with Rafi over a dispute over royalty with the HMV. During the three years they went on with this cold war, Rafi loyalists like Naushad used Asha instead of Lata for duets and on the other hand, Lata loyalists like S.D.Burman used Kishore Kumar to sing duets with her. This gave Kishore Kumar the perfect opportunity to showcase his talent with songs like Gaata Rahe Mera Dil, while all the other solos of Dev Anand in Guide were sung by Rafi. The first song which they sang after the tiff was Dil Pukare from Jewel Thief. Meanwhile, she even had a tiff with S.D.Burman and did not record a single song with him for many years. It was R.D.Burman who brokered peace between them and got her to sing Mora gora ang lele for Bandini under S.D.Burman.

When Suman Kalyanpur and Vani Jairam broke into the music scenario as overnight stars and slipped away without trace, Lata was accused of using her clout to get rid of unwanted competition. Once a dispute arose with the flashy Raj Kapoor and she refused to sing for his films. Raj, who considered Lata his lucky mascot, made peace with her and never let her go thereafter. From Barsaat to Ram Teri Ganga Maili, she sang for most of his films, for all the heroines from Nargis, Nimmi, Padmini and Vyjayantimala to Dimple Kapadia, Zeenat Aman, Padmini Kolhapuri and Mandakini.

There was something unusual and magical about her, which made all her opponents return to her fold, seeking the comfort of her voice, for reasons of money, success and superstition. She has been candid about these matters in very few of her interviews, such as those with Ameen Sayani or Nasreen Munni Kabir.

But there is no doubt that Lata Mangeshkar must never have had it easy. In an industry where every superstar gets jittery every Friday, with every new release, Lata too must have been hurdled with a flurry of competitors. Responding to the accusation of her throttling the competitors in an interview with Sayani, she once said “Once a person came with his daughter to S.D.Burman and said that she sings like Lata, to which dada replied saying why he should take someone who sang ‘like’ Lata, when Lata herself sang for him. Therein lay the problem. The new singers never tried to be different. They tried to be like me rather than cultivating something different from me”.

One cannot deny that even today, every big and small singer aspires to sing ‘like’ Lata Mangeshkar. Every musician worth his notes has his favourite Lata song. There is a Lata song for every emotion and every occasion. If you are happy, there is Panchi bano udti phiroon. Few songs capture the pathos pf broken dreams like Rulake gaya sapna mera. Even today, there has been no greater anthem of love than Pyar kiya to darna kya. How many kids went to sleep with the lullaby Chanda hai tu mera suraj hai tu. Chalte Chalte from Pakeezah still captures the sense of losing oneself in love. Every bhajan seems incomplete without Allah tero naam and every marriage party loves Raja ki aayegi baraat. In her illustrious career, she has been showered with one award after the other, so much so that she stopped accepting Filmfare awards after 1969. This month, as she turns 80, it is difficult not to say that her voice still does not carry the spiritedness of a girl of 18. Age has taken its toll, but then there is still some air of classicism, mysticism and lyricism about her. These have made her ageless.

3 thoughts on “Lata Mangeshkar: A song for every occasion”