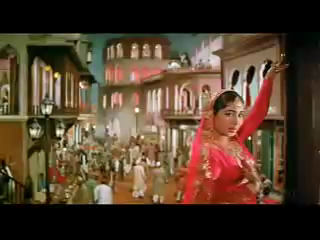 I had watched Pakeezah in my school days. I loved the songs then but felt that the movie was too slow and went too deep into details . I was however impressed with the overall effect and it remained in my heart since then. Today, watching Pakeezah after many years, I fell in love with it all over again. There is an inexplicable aura about the movie, which remains fresh in the closed pages of your heart. It simply refuses to dry out and become an adorable ruin of the past.
The story is simple and quite well known. Meena Kumari plays a double role as Nargis and Sahibjaan. Nargis, wedded to Shahbuddin (Ashok Kumar), dies giving birth to her daughter in a graveyard after being rejected by her in-laws for being a courtesan. Her daughter grows up, under the watchful eyes of her sister (Veena) and becomes the famous geisha Sahibjaan. One day, Sahibjaan finds a letter placed between her toes from an unnamed lover (Rajkumar playing the character Salim) praising the beauty of her feet.
Her life changes thereafter and she discovers the joys of love. A series of twists and turns finally lands her in the warm embrace of her love, to whom she finally reveals that she is a tawaif and not worthy to be married to him. But he decides to break the conventions and rebels against his family. During their marriage, he rechristens her Pakeezah (pure hearted). She has been too much of an ignominy for him. Thinking that her attempt to break the threshold of her kotha always landed her love in trouble, she forsakes her love and runs away from her destiny. On her return, Sahibjaan receives an invitation to perform a mujra at a marriage, which turns out to be that of Salim. Unmindful of the world around her, she moves into relams of masochism and bleeds her once beautiful feet dancing on pieces of a broken chandelier. Pakeezah dances, waiting for justice to be done.
It requires solid passion to hold on to a project for more than a decade and get it done, even when the herione is counting her last days. Made over fifteen years, Pakeezah met numerous set backs. Kamal Amrohi shelved the movie after shooting a few scenes in black and white. In the late sixties, after watching its rushes, Nargis and Sunil Dutt advised Kamal Amrohi and Meena Kumari to bury their differences and proceed with the project. Thus began the shooting of Pakeezah. Initially Dharmendra was considered for the role of Salim, which was eventually done by Raj Kumar. Meena Kumari did the dubbing of many of the scenes from her bed and her condition was so bad during the last days that she collapsed while attempting to shoot the mujra Aaj hum apni duaon ka asar. Soon a body double Padma Khanna was spotted and Meena Kumari personally trained her to walk move like her. Padma’s face remained veiled throughout the song and and the veil was lifted at instances to show Meena Kumari’s face. Meena Kumari’s face was cleverly hidden throughout the song Chalo dildar chalo, with the camera panning across the expanse of the star-lit sky.

The torn kite, symbolising her own life

A parrot in a golden cage is gifted to her – a parallel to her own life
The movie, no doubt, contains flaws. But Pakeezah catches one’s attention for its silent charm. It captures the decaying mileu of the Awadh of the early 20th Century. The culture of courtesans was coming to an end and they were soon to move to other professions. Rich in visual symbolism, Pakeezah subtly tickles the mind and lures us into another world – a lost world rich in culture, seasoned with couplets, ghazals, havelis and etiquettes. Many scenes stand apart and I shall list a few of them here.
Sahibjaan awakes one morning in a train to find a letter placed between her toes saying “Aap ke paon dekhe, bohot haseen hai. Inhe zameen pe mat utariega; maile ho jayenge”. Sahibjaan turns out. The station is Suhagpur. She has found her man. Equally magical are those scenes where she re-reads the letter, as if to keep the flame alive, supported by the leitmotif tune provided by Naushad.
Sahibjaan almost collapses before Salim after revealing her identity. The frame feezes for a few seconds. Salim lifts her up. What follows is a treat to the senses. The lovers go on what seems like a never ending joyous ride in Chalo dildar chalo chand ke paar chalo.
When the maulvi asks for her name, Salim says ‘Pakeezah’. Sahibjaan, still reeling under the torment of the cheap remarks of the passers by calling her a tawaif looks at him with shock and disbelief. Her new name is a bigger burden on her than her profession. She flees from the mosque for good.
Sahibjaan enters her kotha as we hear feeble strains of all the popular mujras she once sang there. The light of the setting sun is justapoxed with a torn kite hanging outside from a tree as Meena Kumari looks devastated.

Lost in her love

In what seemed to inspire a dance sequence in Sholay, Sahibjaan dances on broken pieces of glass to punish her own past and seek deliverance. The audience, like the on-lookers in the movie, sit speechless as she leaves her footprints all over in red, destroying the dreams of her love, which began with her beatiful feet. Only Kamal Amrohi could have pulled it off.
In a contrast to a later day courtesan drama Umrao Jaan, Pakeezah seems to take a more optimistic view of the fate of courtesans. When praises flowed in after the primiere of the movie, Meena Kumari shed tears thanking her well-wishers. Pakeezah, after getting a lukewarm response, turned out to be a blockbuster a month later after Meena Kumari passed away. Like Sahib Biwi aur Ghulam, Pakeezah seemed to symbolise Meena Kumari. Pakeezah ends with the line in Kamal Amrohi’s voice over “Hazaaron saal nargis apne benoori pe roti hai, badi muddat mein hota hai chaman mein deedavar paida”. It applied too well to Meena Kumari. Decades later, when we saw the climax scene of Sudhir Mishra’s Khoya Khoya Chand, the Pakeezah connection could not be missed out. With all the mystique around her intact, Pakeezah will keep moviegoers spell bound for ages to come.

8 thoughts on “The pure heart of Pakeezah”