Prakash Jha’s Rajneeti has finally hit the theatres. Easy parallels are being drawn between the characters in the movie and the forces dominating the political scenario today. But it was not so easy in the pre-independent times for film makers to pass political comments through their works. Political movies have always been there. But their themes and mode of expression have undergone vast changes over the decades. Prior to 1947, throwing off the foreign yoke was of prime concern. But the British censor board, with its microscopic lens, forbade any kind of tacit or explicit content eulogising freedom or the freedom struggle.
When Sohrab Modi wanted to express the idea of independence, he had to choose a villian in the Greek emperor Alexander and pit him against the Indian hero Puru in Sikander (1941) starring Prithviraj Kapoor and Sohrab Modi. The British censor pressed the panic button after its release and banned it in the army cantonments. Bombay Talkies’ Kismet (1943) is best remembered not only as the movie which gave Hindi cinema its most loved the tested formula – lost and found- but also as the movie which carried a song which shook the consciousness of the nation. Released during the peak of the Quit India Movement, the song Door hato ae duniyawalon yeh Hindustan humara hai forced the lyricist Kavi Pradeep to go underground for months together to dodge arrest, though the defence put forward by the filmmaker was that the word duniyawalon referred to the Germans and not the British. The theatre owners were forced to replay the song over and over again due to popular demand and Gyan Mukherjee made his statement clear. On the other hand, Vijay Bhatt’s Prakash Pictures was more tacit in its commentary. Bhatt made movies which eulogised the philosophy of Mahatma Gandhi without referring to him even once. Hence came movies like Ram Rajya (1943), where the idea of a welfare state was brought out through a cinematic retelling of Bhavbhuti’s Uttar Ram Charit. Sohrab Modi too came out with the idea of justice in Pukar (1939) where a fictional account fo Jahangir was used to portray the ideals of a nation. Political cinema was hushed, but expressive. 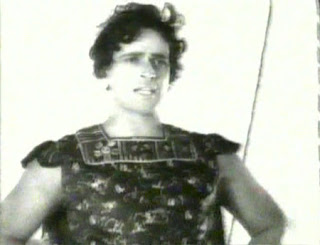 Prithviraj Kapoor as Alexander in Sikander
Things changed after 1947 and political cinema was more boisterous. Every second movie began carrying a patriotic song, as if to emphasise their new-found freedom. Gandhism and Nehruvian socialism ruled the roost in the 1950s. Awara, Shree 420, Jagte Raho, Gunga Jumna, Do Aanken Baraah Haath and Naya Daur were prime examples. But scepticism soon crept in. Bimal Roy’s Do Bigha Zameen (1952) was the earliest angry voice against the model of mass industrialisation chosen by Nehru, though it was more of a social movie than a political one. But it was Guru Dutt’s Pyaasa (1957) which rubbished the utopian dreams of Nehru brazenly. It couldn’t be clearer than it was in the song Jinhe naaz hai hind par woh kahaan hai?
Surprisingly, a movie that carried an angry political tone at the break of 1960s was K.Asif’s Mughal-e-azam (1960). Socialism, monarchy and the ‘Idea of Justice’ were openly discussed and challenged in this epic though it remained a subtext to the love-story. The late 1950s saw some of the earliest scams in public life and the political class was not so easily associated with morality anymore. Power had sunk in and corruption was rising even in the higher ends of the hierarchy. Ram Mukherjee’s Leader (1964), for the first time, had a politician as the out-and-out villain. Mukherjee erected the fourth pillar of democracy to challenge this might and cast Dilip Kumar as the fearless journalist who takes on the political class. Political cinema now onwards was no more subtle but was all about the hero taking on the corrupt politicians. 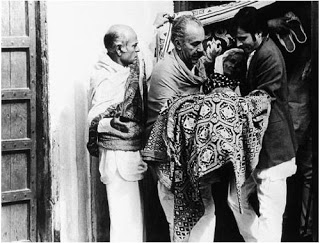 The communal winds of Garam Hawa

The cinema of seventies, in spite of being escapist reflected the angst and anger of a generation wronged and failed by the political class. The rise of authoritarianism, opportunism and under-the-table dealings in the political market reflected in cinema as well. Manoj Kumar’s Roti Kapda aur Makaan and Yash Chopra’s Deewar were portrayals of an ambivalent generation in a repressive regime. M.S.Sathyu’s Garam Hawa (1973) in some ways heralded the parallel cinema movement, though Shyam Benegal’s Ankur (1975) formally launched it. Garam Hawa was a poignant depiction of the dichotomy and trauma of the Muslim minority which was left behind in India after partition. The Muslims became second class citizens in Pakistan and were looked at with dubious eyes in India. Never before or after was partition and the plight of Muslims been so sensitively portrayed. The closing scene where the youngster and his father join a left-wing rally demanding justice was in many ways an open-ended answer to the unsolved questions in India’s uncertain political set up. Ankur was a voice of rebellion which opened the flood gates of revolutionary film-making in Hindi cinema. The rise of the peasant class against Zamindari atrocities foretold the rise of an empowered backward class in the coming decades.
Parallel cinema continued to provide some fodder in shaping the political thinking of cinema in the 1980s and 1990s as well. Khalistan, Mandir and Mandal dominated the headlines then. Television had made entry and epics like Ramesh Sippy’s Buniyaad and Bhisham Sahni’s Tamas provided a logical connection between a communally bloodshed of the eighties and the scars of partition to which they could be traced. Kundan Shah’s satire Jaane Bhi do Yaaron was perhaps the best of this age, which was cynical of a future for optimists in a burning India. Sudhir Mishra’s Yeh woh manzil toh nahi spoke of youth in politics but was too early in coming. Saeed Mirza’s Salim Langde pe mat ro and Albert Pinto ko gussa kyun aata hai were again lamentations of a rotten system counting its last days. Raj Kapoor’s Ram Teri Ganga Maili declared the loss of innocence of an ancient nation in the polluted set up of the day. Mandakini’s character Ganga in the course of her journey from the Himalayas to Calcutta faces physical, mental and sexual assault all along the way. Ganga, named to draw a metaphor to the river Ganga (standing for a hopeful India’s inner core), finally loses her purity in a maligned nation.
Then there were movies which had politicians as central characters. Gulzar’s Aandhi and Ram Gopal Verma’s Sarkar fall in that category. These were movies set in intriguing times drawing interesting parallels (Indira Gandhi in Aandhi and Bal Thackeray in Sarkar) talking about the private lives of some larger than life personalities and should not be confused with ‘political cinema’.
The eighties and nineties had plenty of gory political melodramas and the likes of Krantiveer had their dedicated audience. Movies like the Anil Kapoor starrer Nayak were wishful political fantasies than political dramas lacking any ground in reality. Shekhar Kapoor’s Bandit Queen, based on the life of Phoolan Devi, was a mirror to the excesses of the political class in an invisible hinterland. But India was changing post globalisation and the gap between the rural and urban India was growing further. In 2004, in a prophetic mode, Mani Ratnam made Yuva, enunciating the need for young blood in politics. His romanticised approach however found few takers. In 2005, Sudhir Mishra came out with Hazaaron Khwaishen Aisi, based on the Naxal uprising of the 1960s. If the growing rich-poor gap caused alarm to a generation then, its retelling resulted in what has been called by Ashutosh Gowariker as ‘the only genuine political drama of Hindi cinema’. Hazaaron Khwaishen Aisi was bold in its portrayal, fresh in its approach and revealing as an experience. It was no less than a landmark for Hindi cinema and has today set a benchmark for any political movie to be measured against.
It is yet to be seen how Rajneeti fares finally. In some ways, the movie is a reminder of the fact that politics today has been reduced to a clash of personalities. But nevertheless, Hindi cinema still lacks quality political dramas. Today, what is needed in a political movie is the frankness and temerity of Garam Hawa or Hazaron Khwaishen Aisi. Filmmakers should be bold to talk about living around the knot than untying the knot itself. Fact, after all, can be stranger than fiction.

2 thoughts on “When Politics met cinema”