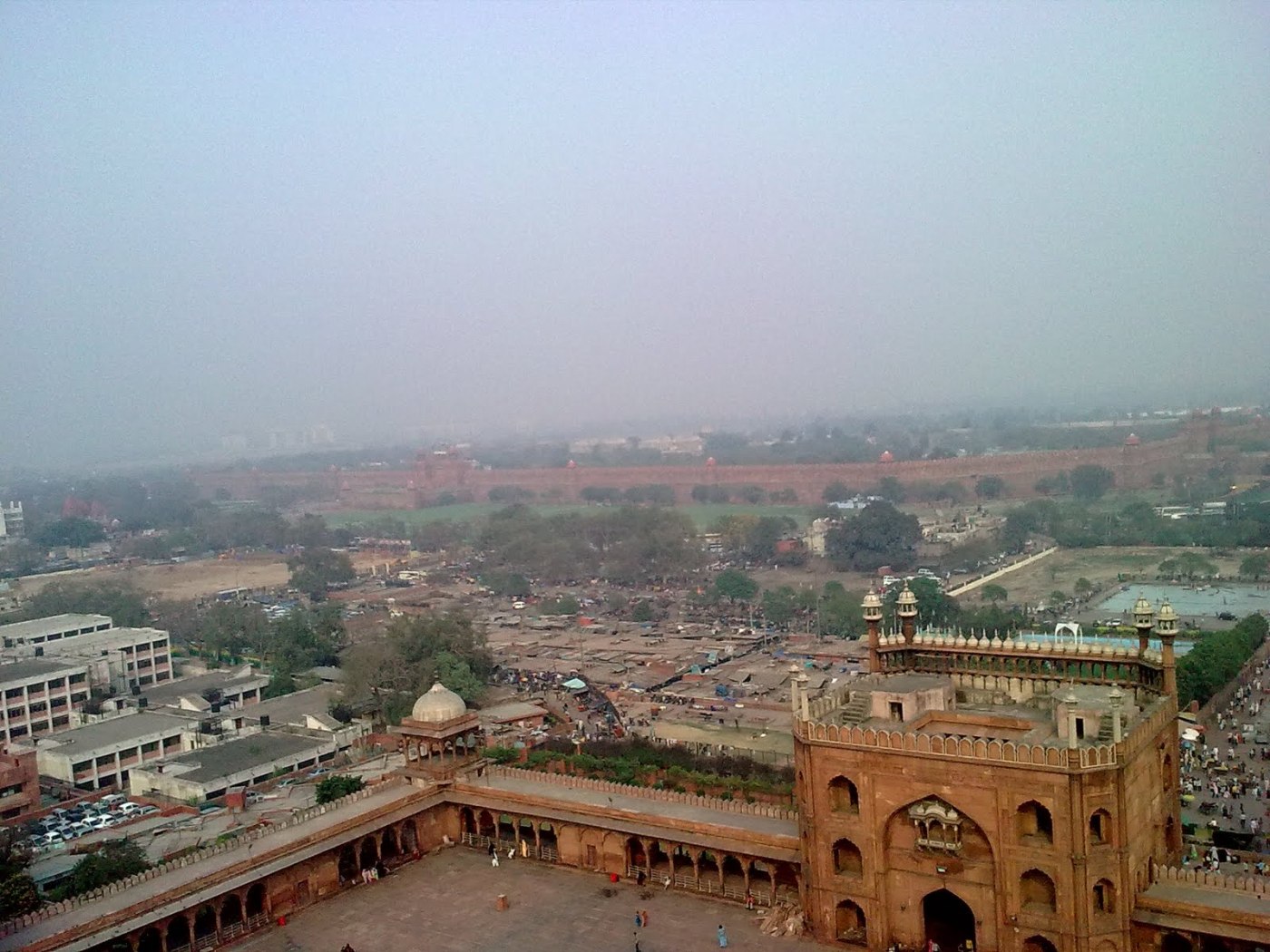 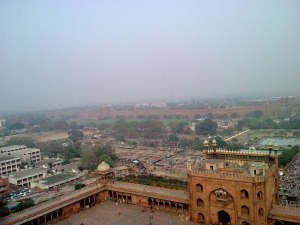 It is quite interesting to see the past, the present and signs of the oncoming future jostling for space and living amidst a riot of colours, permeating the air with ebullience. Being in Old Delhi gives you exactly that feeling. Glamorised and popularised in the recent past through the likes of Dilli-6, Old Delhi, like its name, retains an old worldly charm.
Living in Noida for two years had made us mall rats. All this old world charm was not for my friends Hemanth and Manasi , who wore branded stuff from head to toe. Much to their opposition, I brought them to Old Delhi and soon they found themselves before the Red Fort. The Red Fort has been a witness to much of India’s tumultous history ever since the times of Shah Jehan, who decided to shift the centre of activities from Agra to Delhi. To know more about the fort, we followed a guide hired by a few foreign tourists. It is a much better way than hiring one of your own. The fort lost its glory to the texts of history after the mutiny in 1857. British East India Company captured the fort and plundered it, stripping it off its sheen and glory. Buildings like the Diwan-e-aam, the Diwan-e-khaas, the Rang Mahal, and the Moti Masjid still hold light to the spellbinding glory of the great Mughals. The last of Mughals indeed had a jolly good time in these plush palaces. Resigning their fate to the Raj, they whiled away their time here. Every ruler ruling India has had a fascination for the fort. No wonder, that of all places in Delhi, our prime ministers insist on addressing the nation from its ramparts, for it is still seen as the symbol of supremacy.
We crossed the road opposite to the fort and reached the famed bazaar Chandni Chowk. This is the real walled city, the historic Shahjehanabad. At the beginning of the Chowk is the ancient Digambar Jain Temple. It survived even the fanatical eyes of Aurangazeb’s autocracy. Next to it is the Gauri Shankar temple. A few steps ahead stands the Seesganj Gurudwara, where Aurangazeb executed Guru Tegh Bahadur, in a culmination of a series of clashes between the Sikhs and the Mughals. Next to it stands the Sunehri Masjid. In the 18th century, Nadir Shah invaded Delhi and from here, he oversaw one of the bloodiest slaughters in history where around 20,000 citizens were killed on a single night in Delhi. After a humiliating defeat the Mughal emperor surrendered the Peacock throne from the Diwan-e-khaas and along with it went the magnificient Kohinoor diamond. Opposite to the Sunehri Masjid stands the Baptist Church, a sign of the Christian influence in Delhi beginning from the 19th century. Though unintentionally, I was stuck by the Catholicism and syncretism of the Chandni Chowk. 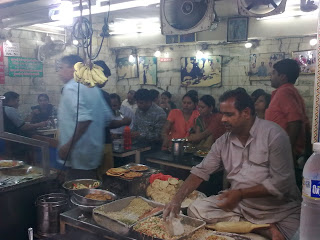 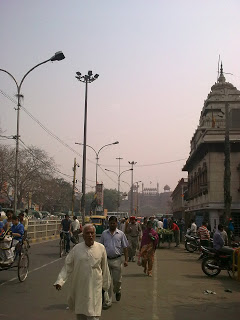 But how can a mention of the Chandni Chowk be complete without a mention of the gobsmacking eateries at every turn. It is unfortunate but Old Delhi is not a very traveller friendly place unless you know it well; so much so that there was not even a single board showing the way to the famed Parathewali Gali. There are around three famous Paratha shops here dating back to over 135 years dishing out varieties of parathas. We placed ourselves in one of those shacks for lunch, amidst college students, foreign tourists and everyday travellers. “Even Pandit Nehru and Shastriji (Lal Bahadur Shastri) came to our outlet” said a man, who was the fifth generation owner of the shop. “There was no media to spread our fame. It is all word-of-mouth publicity that has earned us the fame which has also brought you here. It is only in the past 5-6 years that papers and channels are coming to feature us. Otherwise, the taste that people carry from here is the best advertisement for us. No one knows the names of our shops. But our work speaks well for us. ” Ignoring his talk, Manasi stared at the butter glossing over the paratha. “Eat Madam. For a day forget your calories. You won’t get it elsewhere” said the shopkeeper, reading her calorie-conscious expression. The shops are also lined with photos of various celebrities and politicians who came here to try the parathas and lassis. The shopkeeper was right in his advice and the food won over my friends. Perhaps food is the only way to a person’s heart!
There are many more eateries lined up in Chandni Chowk like Ghantewalas, Jalebiwala, Hauz Qasi and of course, the delectable Karim’s where a whole goat costs as much as Rs. 5000. Karim’s is run by the descendents of the cooks who directly served the Mughal emperors, who still hold the recipes to themselves.
In Gali Kasim Khan stands the haveli of the celebrated Urdu poet Mirza Ghalib. Ghalib spent here the last few years of his life, though he died without having won much acclaim in his life, losing all name and fame to his celebrated contemporary Zauq, who, with the patronage of the emperor, was then considered to be a superior poet. Today, Ghalib’s name chimes with the beauty of Urdu shayri. The dilapidated haveli seemed shrouded in a wave of melancholy. I heard a silent sigh in the form of a ghazal, but ignored it as my imagination.
We walked towards the Jama Masjid, supposedly the largest mosque in Asia. The arched colonnades and the vast expanse of the mosque seemed to welcome us. We walked into the prayer hall and were lost in meditation for a while. We then began climbing the minaret of the Masjid. A 10-minute walk up the narrow alleyways of the circular stairs lead us to the top of the minaret from where we got a splendid view of Old Delhi as cool breeze gently gushed past us. There were people eager to wheedle money out of us under some pretext or the other, whom we avoided adroitly. Pigeons taking a flight every now and then dotted the skyline. We got down and hired a rickshaw as it glided wearily across the labyrinth of Old Delhi. I sensed a calm and smile on the faces of Hemanth and Manasi. I did nothing. Purani Dilli has a way to cast its spell and win hearts.
Legends, facts and folklore intertwine in any old city. Old Delhi is no exception. In the 19th century, Delhi was a Mughal garden full in bloom in the spring before the autumn of the revolt destroyed it completely. The memories of the spring of yore are so powerful that it is still permeating fragrance at every turn. Seeing the colours, flavours, narrow roads, rundown electric poles and century-old buildings, it seems the spring and autumn are also jostling for space, one taking over the other every other minute. The poetry of Ghalib, the sweets of Ghantewalas, the faith of the Jama Masjid, the qavallis sung at nights, the squalor of the streets and the commotion of vehicles all seem to be operating in an asymmetric tandem. There is life in this labyrinth; a life which tells a thousand stories of many other lives to live which one has to be present there.
How to get there: Old Delhi is well connected by Delhi Metro and also has a railway station.
Where to eat: Karim’s Parathewalas, Ghantewalas and Jalebiwala are few of the eateries not to be missed
When to visit: It is better to visit the place after the monsoons and before the summer sets in as a large part of the journey is to be covered on rickshaws and on foot.
(This article was published in The New Sunday Express)

4 thoughts on “In Ghalib’s Delhi”