There is one name today that is everywhere from movie screens to feminist discussions, from news rooms to newspaper columns and movie posters to magazine covers. Hindi cinema has suddenly discovered a new icon in Vidya Balan. Post The Dirty Picture, Vidya has suddenly become a new sex symbol and has leapfrogged to the number one slot of Hindi movie power list, toppling Kareena Kapoor and Priyanka Chopra.
But there is a reason I like Vidya Balan. It is not just for the way she sashayed away with oomph in Oo la la… My liking for this diva also has something to do with the Indian liking for the underdog. Vidya always had the odds set against her. She comes from a middle-class Tamil Brahmin family, not an ideal place to nurture dreams for the silver screen, where parents would rather have their children pass out of IITs and IIMs and land in a cushy IT job. As a child she would keep acting out scenes of Shabana Azmi’s movies in front of the mirror, jerking out tears while doing the emotionally intense scenes. Little did she know then that actresses could use glycerine to do the same. She was born with emotions on her finger tips, ever ready to dish out one when required.
She started off with Ekta Kapoor’s popular sitcom Hum Paanch, playing the bespectacled nerd Radhika. That itself was a wrong step for a movie career. Except for Shahrukh Khan, no television actor could really wear off the TV label and make it big in cinema. She did many ad films where she sold umpteen bars of soap and washing powder, exclaiming “Woh bhi dekho budget mein!” She signed as many as 12 films in the south and was removed unceremoniously out of all of them. By the time her first film got released in 2005, she was 27, far from an ideal age to begin a Hindi movie career as a heroine.
As she applied that dot of sindoor and turned towards the audience with sharp eyes in the summer of 2005, you knew that Parineeta had arrived. No actress would have chosen such a role to start with if she intended a mainstream career. She was choosing the alternative path from the initial point. The demure, sari-clad, classical look was enough to typecast her as a girl for Indian (read –behenji) roles. But Vidya knew what she wanted. She was not in the rat race from day one. Her next one Lage Raho Munna Bhai had little importance for her role, though she made that “Good Moooorning Mumbai” oh, so refreshing.
Her downward slide began after that. She tried to fit herself into the conventional mould, when she was not meant for that. Films flopped and she chose all wrong roles for herself. When she was torn down by critics for her looks in Hey Baby, she retorted saying she wore what the designers gave her. This was enough for Manish Malhotra to get back at her with the caustic remark “How can she speak about fashion sense with her fantastic figure? Who is she?”
Most of her career moves have been suicidal at first thought. It takes guts to play Amitabh’s mother at the prime of your career. After winning a Filmfare award for Paa, we saw her next playing Krishna, a woman who used her sexuality to get what she wanted from the two men who were set to woo her in Ishqiya. This was a role meant for what we call vamps in Bombay cinema. A heroine never plays with love for some mean end. But Vidya played the heroine and a bitchy one at that and won her next award. She had now started getting the limelight of the movie on herself, rather than on the male leads of the film. In her next venture, she did away with the male lead completely when she played Sabrina Lal and No one killed Jessica added another feather to her cap.

The Dirty Picture was however a make or break film. Had it not worked, she would have become the butt of all jokes in an industry which does not like the rise of a female superstar. How many of them have we had? In the 1950s we had Nargis, who needed no male support to run a world classic like Mother India. There was Meena Kumari in the 1960s. The male leads at the top dithered to star opposite her for her screen presence made it impossible for them to hold on. In most of the movies in the later half of her career, she seldom had the top actors opposite her for she could run the movie on her merit alone, right up to her swansong Pakeezah.

Then we had Hema Malini, our own dream girl, who had an amazing screen presence. She was not great at histrionics like Meena Kumari, yet she was the top favourite for a long time. 1970s was the time when the movies became more male-driven and by 1980s, the heroine was a decorative cherry on a cake, not essential but good to have. It was at this juncture that Shabana Azmi and Smita Patil came in like winds of change and wrote their own story in parallel cinema. Rekha and Sridevi strode a different path in the 1980s, making an alternative to the male story with successes like Umrao Jaan, Ijazat, Lamhe and Chandni. Counting Ek, do, teen, Madhuri, launched a thousand hearts beating with her smile. Madhuri was the last female superstar, the female Amitabh Bachchan, as the media called her. 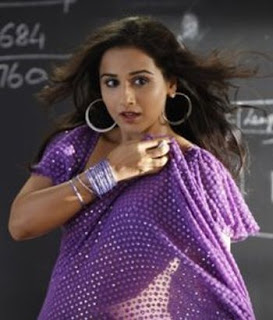 Too much of glory to the heroine threatens the standing of the male actors, which is seldom allowed to happen. Vidya has entered in that scenario. She has the guts to declare that she will remain Vidya Balan and if the Khans want, they can add Balan to their surname. This declaration comes not from arrogance, but with an attitude hardened with multiple failures. She can wear the fat around her waistline and say “Size zero is so passé”. She can make the sari look sexy all over again. She is one who can wear a red sari and look like a middle-class Bengali housewife and wear the same red sari to shake your seats as the sex-bomb Silk. If our convention-ridden eyes did not recognize her star value before, it’s a shame on our sensibilities which looks only for glitter and not gold. In the loud era we live in, we forgot the nuances she tried to convey and she had to become the loud and garish Silk to make herself heard.
In 3 Idiots, Aamir says “Don’t run after success. Make your work so good that success runs after you”. Perhaps Vidya learnt that lesson too well. This post is for her, for her unconventional wisdom and for proving that odds set against you can be fought. I’m glad the idea of the heroine is still alive.