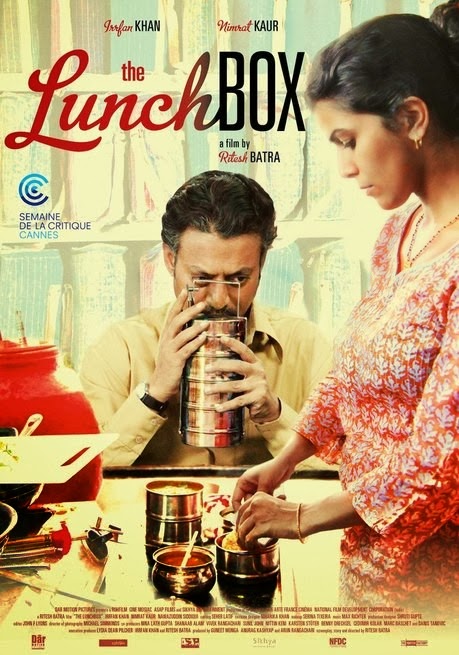 The Lunchbox (Dabba) won the Critics Week Viewers Choice Award at the 2013 Cannes film festival
Sometimes, a wrong train can take you to the right destination. This is the premise of Ritesh Batra’s The Lunchbox, produced by Anurag Kashyap, Guneet Monga, Karan Johar, Siddharth Roy Kapur and Arun Rangachari.
Saajan Fernandez (Irrfan Khan), a no-nonsense, lonely widower, is having one more month to go for his retirement at a government office. A new employee at the office, Shaikh (Nawazuddin Siddiqui), is supposed to take over from him and constantly tries to learn work from him in vain. One day, a lunchbox is wrongly delivered to Saajan by a dabbawala and he relishes his lunch after a long time. The box, packed by Ila (Nimrat Kaur), was meant for her husband (Nakul Vaid), who is indifferent to her efforts to cook something new for him everyday. However, Ila basks in this new appreciation for her cooking from this stranger and sends him a note of thanks. The story is unfolded through a series of notes exchanged between Ila and Saajan, where they share special and mundane aspects of their everyday life. Ila constantly seeks advice from a neighbourhood aunt (Bharati Achrekar), who is only heard, but not seen throughout the film. As the date of retirement finally comes for Saajan, it is time for him and Ila to take stock of their lives and arrive at a decision.

Ritesh infuses The Lunchbox with a lot of warmth and compassion.  Many elements in this movie seem to be a fond recollection of the times we lived in many years ago. Sometimes, they appear in the form of handwritten notes in an age of sms and emails and sometimes, through a friendly banter between Ila and the neighbourhood aunt, in an age when we do not even know the names of our neighbours. Saajan spends a few evenings playing video cassettes of the popular sitcom Ye Jo Hai Zindagi, to relive the moments he spent with his wife, though with a tinge of regret of not having given enough time to her. With the stranger Saajan coming in, Ila gets a reason and incentive to live her life. Shaikh, who has grown up as an orphan, strikes a chord with Saajan and builds a life out of the broken pieces handed over to him.
The Lunchbox is driven by its well written script and stellar performances. While Irrfan and Nawazuddin yet again prove their mettle, Nimrat is a true discovery. She matches the performances of these wonderful actors with ease. Without appearing in a single frame, Bharati Achrekar endears herself to the viewers with her witty remarks and free advice. Even as the story flows seamlessly, we get brilliant shots of Mumbai, with its bus rides, local trains and streets bursting with people. With understated dialogues, warm performances and a relatable storyline, The Lunchbox gives you a memorable aftertaste.