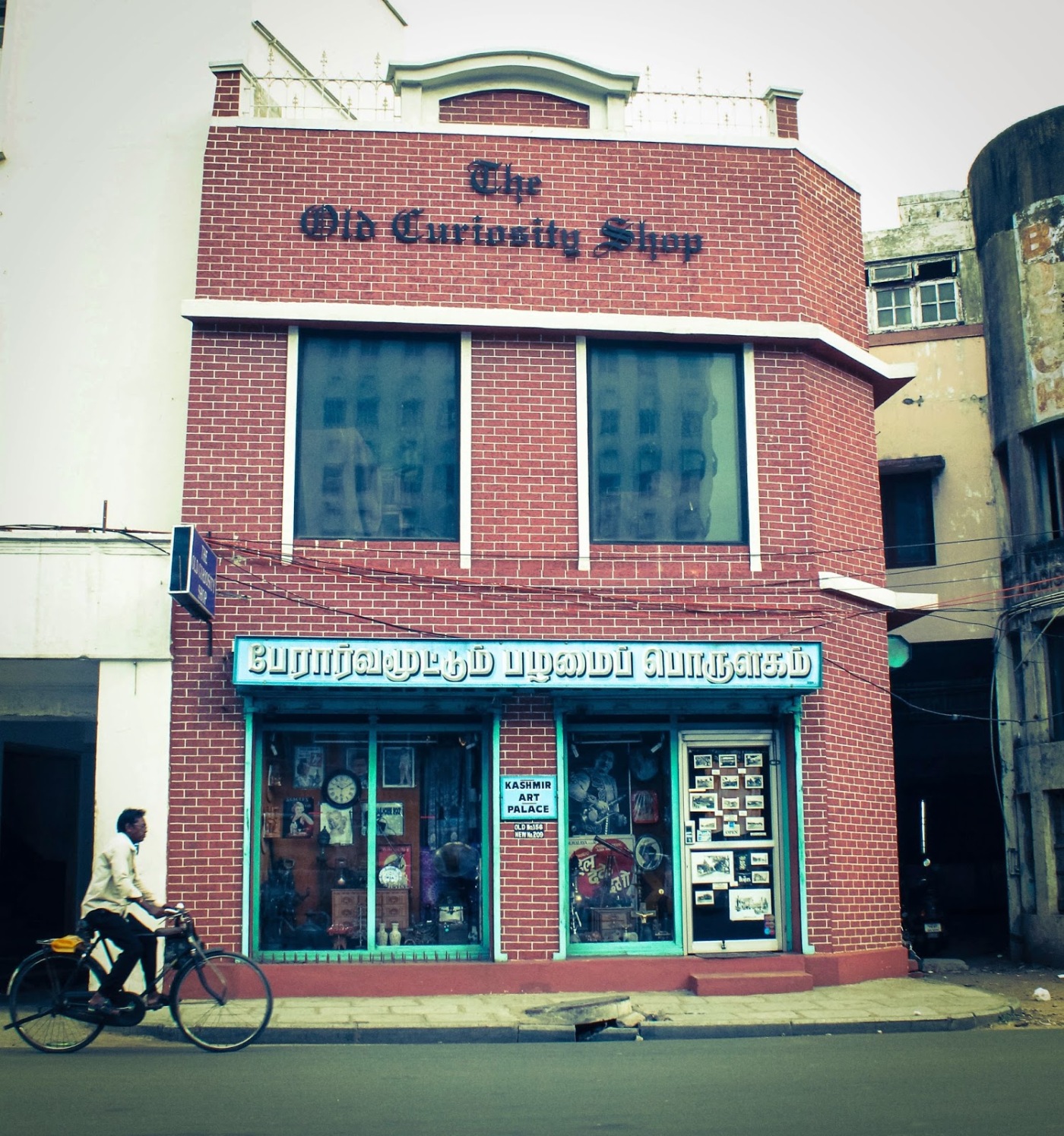 This was published previously in The Economic Times, Chennai, to mark the Madras Week celebrations

Generations of lovers of English literature have grown up reading The Old Curiosity Shop,the Charles Dickens classic, which describes the life of Nell Trent and her grandfather who together run a shop of odds and ends in England. Around 70 years ago, G Mohammed packed his bags from Delhi and left for Chennai (then Madras) to open the Kashmir Art Palace on Mount Road, opposite Spencer Plaza. The shop soon made a name for itself for its priceless Kashmiri carpets, jewellery and shawls, besides other artefacts from across the country and many of their customers were of British origin. They connected this corner shop with their beloved novel and called it The Old Curiosity Shop.

Today, Mohammed’s son M Lateef stands at the counter and personally attends to the customers who drop in.”My father was a peaceful man and was into business in Kashmir as well. He liked Madras for its educated crowd and the peace that prevailed here, compared to the highly volatile north. When this shop began, Spencer Plaza was only a departmental store. Taj Connemara (now Vivanta) was right across the road and this was a very posh area then. The customers were easily drawn to this place,” says Lateef, who ascribes his passion for collectibles to reading and travelling.

Lateef believes that changing lifestyles and the modernisation of Chennai over the past decade has also aroused some amount of interest in collectibles as people travel more now.”We have many customers working in the IT sector. They are unaware of history but keen to know. My job is to instill passion in them for these things, which represent our history,” says Lateef, who seems to be least disturbed by walk-ins who have no intention to buy artifacts.

As you turn to take a closer look at the objects there, Lateef turns an old radio set on.”This was manufactured in the 1940s and it takes some time to heat up, before it receives signals,” he says. And it does pick up signals. Lateef fine tunes it to the frequency of Vividh Bharti and an old Naushad composition  – Madhuban mein Radhika nache re – comes out in the golden voice of Mohammed Rafi.”I don’t’ sell objects here.I help them take a trip to the past,” he says as he takes me around.

Walk around the shop and you realise what draws people here. There are usual items you find in a store of artifacts like a gramophone player, old telephones, Ravi Verma paintings dating back to the 1920s and fine pieces of Mughal paintings. But dig deeper and you will find much more. There is a first generation portable Reddington typewriter, a Tamil typewriter made in Switzerland, old fountain pens, old tin posters of advertisements, pad locks, innumerable rare coins, fancy old lamps, stamps and telescopes. There are copies of comics like Superman, Spooky, and Casper, which are almost half a century old, which along with many tin and wooden toys, are a part if his private collection. Leteef takes out a set of vinyl records and names of several popular bands and artistes, such as Jim Morrison, Pink Floyd, The Beatles and many Hindi films can be seen on the cover. On the wall hangs a pencil sketch of the legendary actress Nargis Dutt, dating back to the 1950s.”Many people suggested that sell this to her son Sanjay Dutt. But I saw no point in it,” he says.

There are copies of a few old books as well, some of which were printed over a century ago. In that pile is an old copy of Rabindranath Tagore’s Gitanjali. Lateef has an enviable collection of movie posters, which has names like Deedar (1951) and Mughal-e-azam (1960) among them.”Most tourists visiting this shop would have kept this as their final destination and would have obviously gone through a couple of unpleasant experiences in the country. The environment of this shop gives them a pleasant aftertaste and in a way helps them get over those bad experiences,” says Lateef, as he takes out his visitor’s book. There are names and signatures of innumerable diplomats who have visited the country. There is the Queen of Greece having made her presence. This is followed by names like Ustad Zakir Hussain, Sachin Tendulkar, Maneka Gandhi, Paul Theroux, Hari Prasad Chaurasia and many others, whose names run into reams.”Even Jawaharlal Nehru has visited this shop. Whether it was MGR, K Karunanidhi or MS Subbulakshmi, we did our best to make them feel at home here,” he says.

It is obvious that all this living history has not escaped the eyes of the film makers. Lateef provides his inputs using materials from his treasure house to those who make period films.”I know history. The Tamil hit Madirasapattinam was beautifully made and they so successfully recreated the Madras of 1940s.I had given my inputs for the art direction using the materials here,” says Lateef. As I take leave, I notice that the interior of the shop is well hidden to outsiders with huge posters and artefacts.”Well, once people passing by get to know what is inside, this will not remain the Old Curiosity Shop,” says Lateef.
Photos: By the author