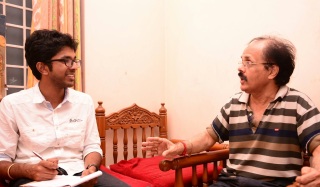 He has redefined comedy in cinema and has been at the forefront of an active theatre culture in Chennai. Crazy Mohan talks about his inspiration, works and the city of Chennai. This interview was published in The Times of India

As we settle for a conversation at the residence of Mohan Rangachari, he is brimming with excitement over the success of his play Chocolate Krishna, which has completed 760 shows and is on the way to touch the 800-show mark. It is not theatre alone that keeps him on his toes. Paintings by him adorn the walls of his home and he excitedly keeps checking the score of a cricket match. But then, writing has been his mainstay.
“Your career is destined regardless of what you study,” says Mohan, who did his graduation from the Government College of Engineering, Guindy. “You have to develop as many hobbies as possible at a very young age so that you can take one of them seriously as a career later in life and also have something to look forward to after retirement. God chose me. I didn’t choose my career. I only see myself as a custodian of humour.”
Going back in time, Mohan gets nostalgic about the people who inspired him in his life, right from his wife, his mother, grandmother and his teacher Janaki. “My teacher sowed the seeds of good literature in me. Under her tutelage, I began reciting lines from Veerapandiya Kattabomman for a play. As a mark of tribute to her, I decided that I would name the heroine in every movie written by me Janaki,” he says. There are other names that crop up. “My guru Agnihotram Ramanujar Tatachariar made me see the divine in everyone. In everybody’s laughter I can see God. Kanchi Paramacharya once said that a humourist is the closest to God because he makes people happy. To think of it, the origin of slapstick comedy goes back to the puranas, when Vishnu did thoppukaranam to make Ganesha laugh and get the sudarshana chakra out of his belly. But in the space of literature, I was heavily drawn to the humour of Devan and PG Wodehouse. There is exaggeration to the limit of absurdity in the humour of Wodehouse,” he says.
Mohan’s flair for the unusual was noticed when he was in college, as he wrote the play The Great Bank Robbery. He got the award for best writer and actor from the hands of Kamal Hassan that year. Little did he know then that the duo would make one of the most successful writer-actor pairs in comedy, in Tamil cinema. “Kamal is a polyglot. He is well-read in many languages. I have many friends who are Palghat Iyers and I used their lingo to the hilt when I wrote Michael Madana Kama Rajan. While writing Thenali, Kamal and I listened to several tapes of Radio Ceylon to get the Ezha Tamil right for his character.”
It’s been close to 40 years of writing now and Mohan believes that theatre has improved since 1976, when he started working. Picking his favourites on Chennai’s theatre scene, he names Augusto and S Ve Shekher. “I have also been a huge fan of the plays of Balachander, Cho Ramaswamy and Sivaji. Initially, theatres thrived on the sabha model. Today, it is sponsored by corporates. In some ways, theatre has taken the Twenty20 model. But it is fine, as I believe that trend is the best friend.” Mohan also says that serious quality work can take time to take off and find recognition. “Remember, when Krishna narrated the Bhagvat Gita, he only had one person in the audience but today, it has won over the world.”
Call him a complete Chennaiite and he corrects you promptly. “I am a complete Mylaporean. I was born here, studied at PS High School, my theatre activities were centred around here and even Kamal’s office, where I spent a lot of time, was in Alwarpet. I feel homesick even when I go to Mambalam. Before I write the first line of a play, I place them at the feet of Goddess Karpagambal to seek her blessings,” he says. So how does he define himself at the end? “I am a jack of all trades and master of fun.”