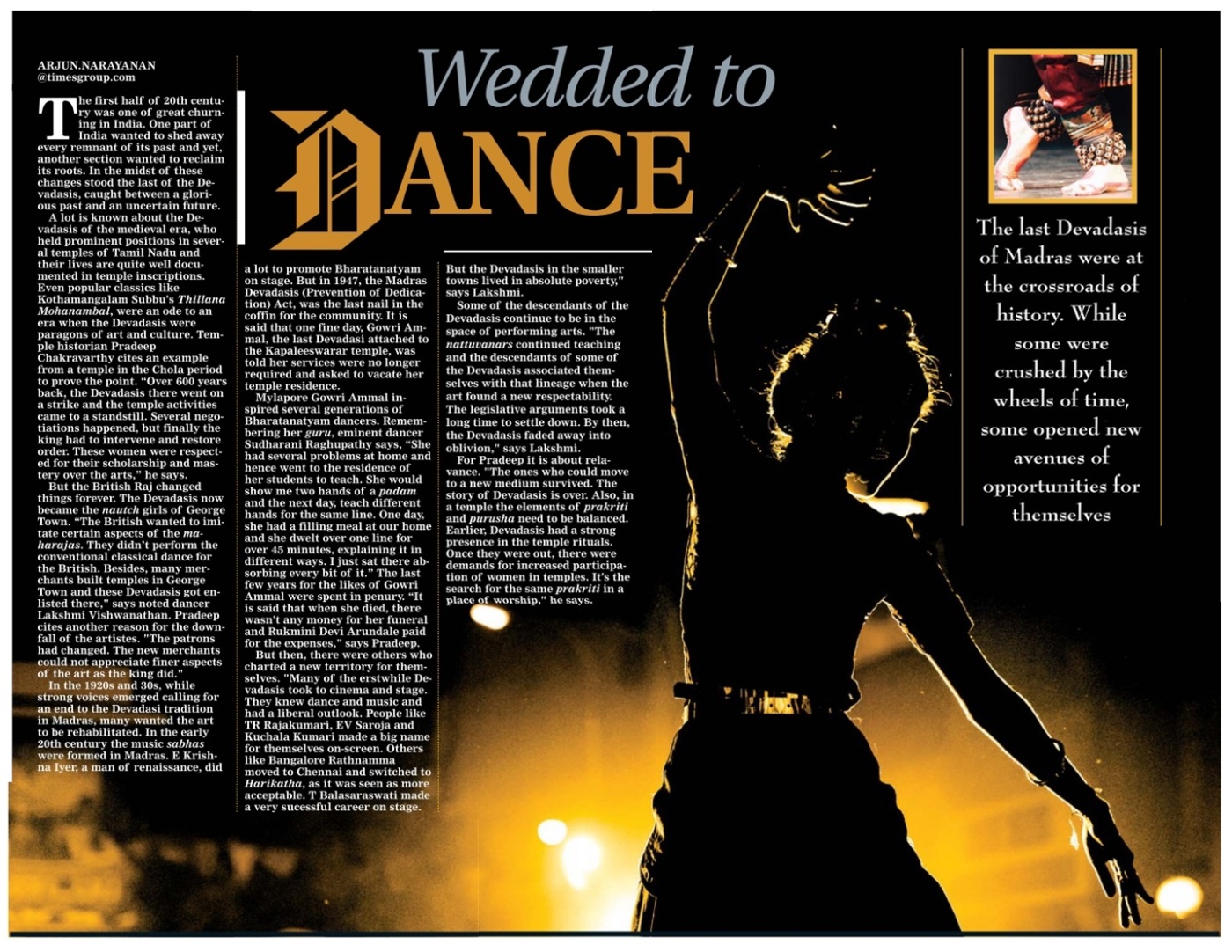 The first half of 20th century was one of great churn ing in India. One part of India wanted to shed away every remnant of its past and yet, another section wanted to reclaim its roots. In the midst of these changes stood the last of the Devadasis, caught between a glorious past and an uncertain future.

A lot is known about the Devadasis of the medieval era, who held prominent positions in several temples of Tamil Nadu and their lives are quite well documented in temple inscriptions.Even popular classics like Kothamangalam Subbu’s Thillana Mohanambal, were an ode to an era when the Devadasis were paragons of art and culture. Temple historian Pradeep Chakravarthy cites an example from a temple in the Chola period to prove the point. “Over 600 years back, the Devadasis there went on a strike and the temple activities came to a standstill. Several negotiations happened, but finally the king had to intervene and restore order. These women were respected for their scholarship and mastery over the arts,“ he says.
But the British Raj changed things forever. The Devadasis now became the nautch girls of George Town. “The British wanted to imitate certain aspects of the maharajas. They didn’t perform the conventional classical dance for the British. Besides, many merchants built temples in George Town and these Devadasis got enlisted there,“ says noted dancer Lakshmi Vishwanathan. Pradeep cites another reason for the downfall of the artistes. “The patrons had changed. The new merchants could not appreciate finer aspects of the art as the king did.“
In the 1920s and 30s, while strong voices emerged calling for an end to the Devadasi tradition in Madras, many wanted the art to be rehabilitated. In the early 20th century the music sabhas were formed in Madras. E Krishna Iyer, a man of renaissance, did a lot to promote Bharatanatyam on stage. But in 1947, the Madras Devadasis (Prevention of Dedication) Act, was the last nail in the coffin for the community. It is said that one fine day, Gowri Ammal, the last Devadasi attached to the Kapaleeswarar temple, was told her services were no longer required and asked to vacate her temple residence.
Mylapore Gowri Ammal inspired several generations of Bharatanatyam dancers. Remembering her guru, eminent dancer Sudharani Raghupathy says, “She had several problems at home and hence went to the residence of her students to teach. She would show me two hands of a padam and the next day, teach different hands for the same line. One day, she had a filling meal at our home and she dwelt over one line for over 45 minutes, explaining it in different ways. I just sat there absorbing every bit of it.“ The last few years for the likes of Gowri Ammal were spent in penury. “It is said that when she died, there wasn’t any money for her funeral and Rukmini Devi Arundale paid for the expenses,“ says Pradeep.
But then, there were others who charted a new territory for themselves. “Many of the erstwhile Devadasis took to cinema and stage.They knew dance and music and had a liberal outlook. People like TR Rajakumari, EV Saroja and Kuchala Kumari made a big name for themselves on-screen. Others like Bangalore Rathnamma moved to Chennai and switched to Harikatha, as it was seen as more acceptable. T Balasaraswati made a very sucessful career on stage. But the Devadasis in the smaller towns lived in absolute poverty,“ says Lakshmi.
Some of the descendants of the Devadasis continue to be in the space of performing arts. “The nattuvanars continued teaching and the descendants of some of the Devadasis associated themselves with that lineage when the art found a new respectability.The legislative arguments took a long time to settle down. By then, the Devadasis faded away into oblivion,“ says Lakshmi.
For Pradeep it is about relavance. “The ones who could move to a new medium survived. The story of Devadasis is over. Also, in a temple the elements of prakriti and purusha need to be balanced.Earlier, Devadasis had a strong presence in the temple rituals.Once they were out, there were demands for increased participation of women in temples. It’s the search for the same prakriti in a place of worship,“ he says.
(This story was originally published in The Times of India’s special supplement Madras Diaries)

One thought on “The last Devadasis of Madras”