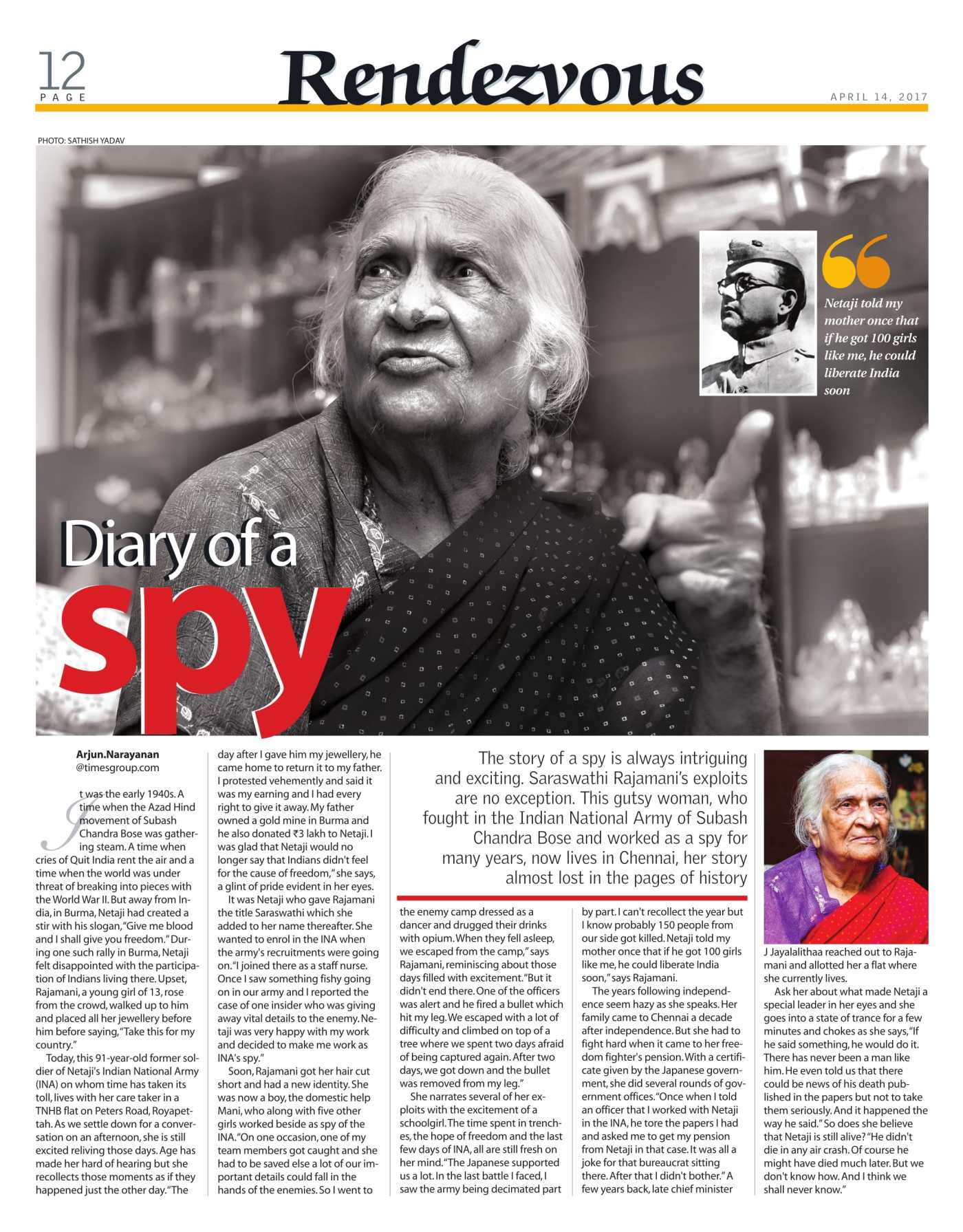 Several millions worked together for a century to ensure that people like you and me live in a free India. While a handful of names from the freedom movement went on to gain glory in our history text books, most were lost in the lanes of time. Some forgotten, some hidden. Perhaps, even time cannot retrieve them. But I was fortunate to find one person. This is her story….

It was the early 1940s. A time when the Azad Hind movement of Subash Chandra Bose was gathering steam. A time when cries of Quit India rent the air and a time when the world was under threat of breaking into pieces with the World War II. But away from India, in Burma, Netaji had created a stir with his slogan, “Give me blood and I shall give you freedom.”During one such rally in Burma, Netaji felt disappointed with the participation of Indians living there. Upset, Rajamani, a young girl of 13, rose from the crowd, walked up to him and placed all her jewellery before him before saying, “Take this for my country.” Today, this 91-year-old former soldier of Netaji’s Indian National Army (INA) on whom time has taken its toll, lives with her care taker in a TNHB flat on Peters Road, Royapettah.

As we settle down for a conversation on an afternoon, she is still excited reliving those days. Age has made her hard of hearing but she recollects those moments as if they happened just the other day.“The day after I gave him my jewellery, he came home to return it to my father. I protested vehemently and said it was my earning and I had every right to give it away. My father owned a gold mine in Burma and he also donated Rs 3 lakh to Netaji. I was glad that Netaji would no longer say that Indians didn’t feel for the cause of freedom,”she says, a glint of pride evident in her eyes.

It was Netaji who gave Rajamani the title Saraswathi which she added to her name thereafter. She wanted to enroll in the INA when the army’s recruitments were going on.“I joined there as a staff nurse. Once I saw something fishy going on in our army and I reported the case of one insider who was giving away vital details to the enemy.Netaji was very happy with my work and decided to make me work as INA’s spy.”

Soon,Rajamani got her hair cut short and had a new identity. She was now a boy, the domestic help Mani, who along with five other girls worked beside as spy of the INA.“On one occasion, one of my team members got caught and she had to be saved else a lot of our important details could fall in the hands of the enemies.So I went to the enemy camp dressed as a dancer and drugged their drinks with opium.When they fell asleep, we escaped from the camp,” says Rajamani, reminiscing about those days filled with excitement.“But it didn’t end there. One of the officers was alert and he fired a bullet which hit my leg.We escaped with a lot of difficulty and climbed on top of a tree where we spent two days afraid of being captured again. After two days, we got down and the bullet was removed from my leg.”

She narrates several of her exploits with the excitement of a school girl. The time spent in trenches, the hope of freedom and the last few days of INA, all are still fresh on her mind. “The Japanese supported us a lot. In the last battle I faced, I saw the army being decimated part by part. I can’t recollect the year but I know probably 150 people from our side got killed. Netaji told my mother once that if he got 100 girls like me, he could liberate India soon,” says Rajamani.

The years following independence seem hazy as she speaks. Her family came to Chennai a decade after independence. But she had to fight hard when it came to her freedom fighter’s pension.With a certificate given by the Japanese government, she did several rounds of government offices. “Once when I told an officer that I worked with Netaji in the INA, he tore the papers I had and asked me to get my pension from Netaji in that case. It was all a joke for that bureaucrat sitting there. After that I didn’t bother.” A few years back, late chief minister J Jayalalithaa reached out to Rajamani and allotted her a flat where she currently lives.

“Once when I told an officer that I worked with Netaji in the INA, he tore the papers I had and asked me to get my pension from Netaji in that case. It was all a joke for that bureaucrat sitting there. After that I didn’t bother.” A few years back, late chief minister J Jayalalithaa reached out to Rajamani and allotted her a flat where she currently lives.

Ask her about what made Netaji a special leader in her eyes and she goes into a state of trance for a few minutes and chokes as she says, “If he said something, he would do it. There has never been a man like him. He even told us that there could be news of his death published in the papers but not to take them seriously.And it happened the way he said.” So does she believe that Netaji is still alive? “He didn’t die in any air crash.Of course he might have died much later. But we don’t know how. And I think we shall never know.”

(This interview was originally published in the special anniversary supplement Rendezvous of The Times of India, Chennai)

One thought on “The diary of a spy”