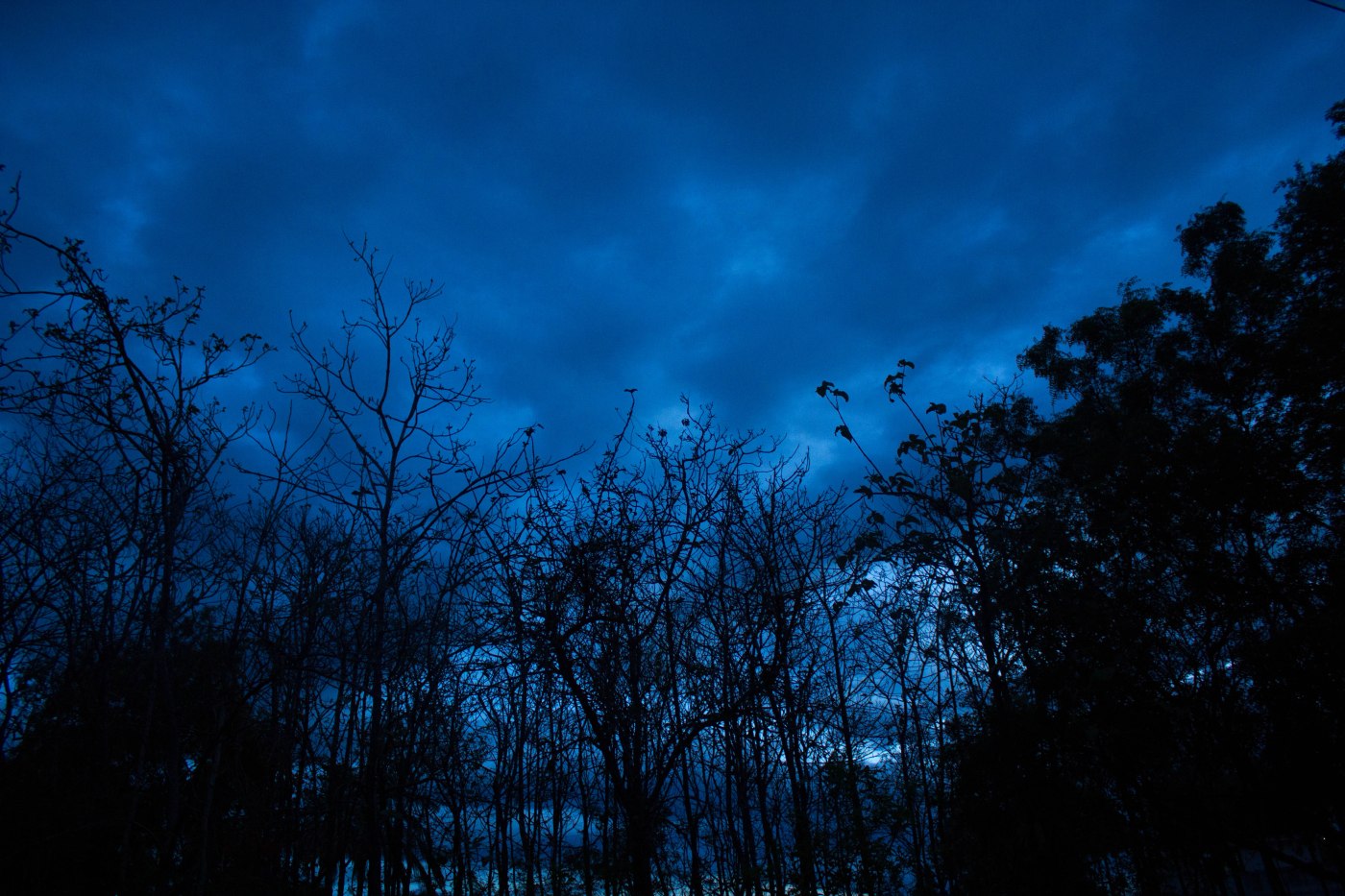 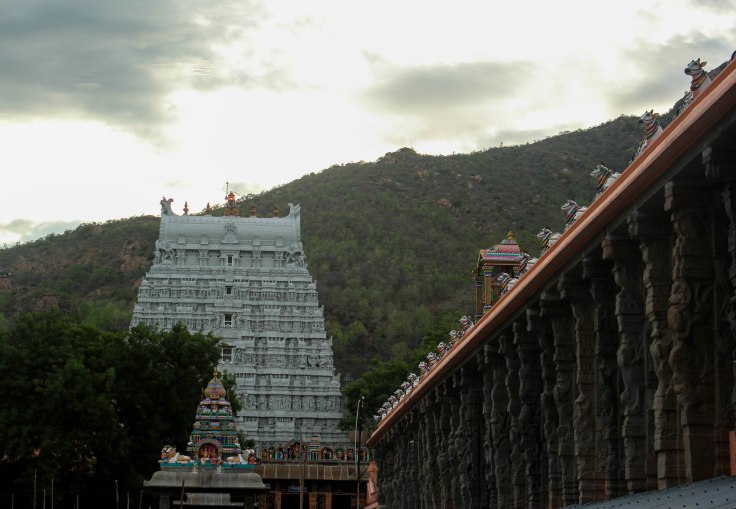 It is said that until the age of 16, the great Indian sage and mystic Ramana Maharishi did not know that Arunachala, the sacred mountain in Thiruvannamalai, was a real place. Having known it as a mystical place right from his childhood, the whole realisation changed him. Two weeks back, we drove down to Thiruvannamalai from Chennai. Pournami, the full moon night, was over a day before we reached there.

There was a slight drizzle when we began our  girivalam (circumambulation around the Arunachala hill) at 2 in the night. The girivalam path had very few people. The moon was busy playing hide and seek with the clouds. We walked on, sitting for a while on the stone benches along the way. But after two or three hours, signs of fatigue were visible in us. After all, we weren’t used to walking 22 kms in one shot in our daily lives. But that didn’t take away the serenity of the time before dawn break.

The deep blue sky looked oceanic. The clouds seemed like waves lashing against each other. The breeze was strong and kept propelling us on the way. We sang hymns in chorus, hardly with any awareness of those around us. It is said that many siddhas reside in the Arunachala hills, not known to us, perhaps in another dimension. As we were nearing the end of the girivalam, we could sense something beautiful and it was just the beginning.

By the time we reached the Ishana Lingam, it was well past sunrise. A kilometer-long walk down the road took us to the Arunachaleshwarar temple, marking the end of our girivalam. Though the plan was to visit the temple after the girivalam, we were quite exhausted by now and we found our way to the Athithi ashram. We removed our footwear, washed our feet and spent the next two days without our footwear. A simple breakfast was served to us on plates we washed once we were done with it. We went to our rooms. The physical exertion was more than enough to put us to sleep.

The spirit of Ramana Maharishi is writ large on the philosophy of the ashrams here and we wanted to spend a good amount of time in the Ramanashram, where we reached around 4 in the evening after a good rest and lunch. Since our trip was not planned much in advance, we had to live outside the Ramanashramam as you need to inform with two months’ prior notice if you want to stay at the ashram.  A life-size portrait of the savant is placed on the cot which he used regularly. While we were meditating inside the old meditation hall, where Ramana Maharishi used to give audience to those who came to meet him, we could hear chants of Rudram and Chamakam from the adjacent hall.The moment took me by surprise. We had to leave for the temple but I didn’t want to let go of this moment. We waited  till the chanting was over and headed for the temple.

The main portions of the Annamaliyar temple was constructed by the Cholas in the 9th century, though major works were done during the Vijayanagara empire, the most prominent of them being the 1000-pillared mandapam. After a darshan at the temple, we returned to Athithi. The ashram is run by monks and sanyasins who have renounced the world. We had our dinner and called it a day. The ashram doesn’t allow entry after 9pm until dawn break next morning.

At 6 in the morning, we found ourselves back in the precincts of the Ramanashramam. Peacocks were responding to the overcast sky with their feathers spread all out. We seated ourselves in front of the samadhi of Ramana Maharishi. The inmates of the ashram were chanting the Aksharamanimalai. This song was composed by Ramana for those who went around the Arunachala everyday for their daily alms. I can’t remember a time from my recent past when a day began on such a mystical note. Early morning rituals were being carried out in the small Shiva temple adjacent to the samadhi hall. The sun was out by now, yet hidden now and then by the clouds. Silence is the defining feature of Ramanashramam. Bhagwan himself believed in the power of silence to settle the upheavals within our minds. The students of the veda pathashala began chanting verses from the Krishna Yajur veda. We hardly spoke a word to each other in the three hours spent there.

After our breakfast, we asked for the way to the Skandashramam and Virupaksha cave. Climbing the hill seemed to take me a lot of effort considering I had done girivalam just a day before and my legs were still aching. But I was determined to traverse the path. Ramana lived in Skandashramam between 1916 and 1922, before he shifted to the ashram at the foothills of Arunachala. All along the path, we could hear the squeals of several monkeys who are all over the hills. I held my camera closely to myself.

After meditating for a while, we trekked further to the Virupaksha cave when a wonderful sight caught my attention en route. The grand temple spread across 10 hectares and the entire town of Thiruvannamali was visible through a wide opening between the bushes. I sat there to the music of a strong breeze and the chirping of birds.

The cave is supposed to reverberate with Omkara. There was something ethereal to the cave that escapes description. The moment I entered the cave, a wave of heat gripped me and I sat there in silence. It is a moment when you come close to understanding the meaning of Aham Brahmasmi, the underlying philosophy of Advaita, when there is no difference between you and him.

After meditating inside the cave for a while, we stepped out. “Do you want to have some tea?” asked an old lady. I sat down, quite tired after walking the long distance and accepted the hot tea that was offered to me. A young man was helping out the woman. He had a roadside shop on the hills where he sold stone artifacts during the peak season. “During the off-season, I take tourists to the top of the hill, which takes an hour from here. If you feel very different after having reached here, I can assure you, you wouldn’t want to leave Thiruvannamalai after reaching the hill top,” he said and pointed at the Virupaksha cave. “This is where Ramana found an answer to the question ‘Who am I’. There is a spiritual aura to the Arunachala hill that goes beyond words. After all, several sages have performed penance here across millenia,” he said.

I got up and asked how much the tea cost. “The old lady is actually a caretaker of a tiny ashram here and serves the pilgrims who come this way. The monk to whom this ashram belongs to has gone on a long journey and she hopes he will return one day. You can pay her what you feel like and even if you don’t, it doesn’t matter.”

We left after paying her, and as I climbed down the hill, I turned back to take another look. I was sure I would be back here soon. To find more answers.