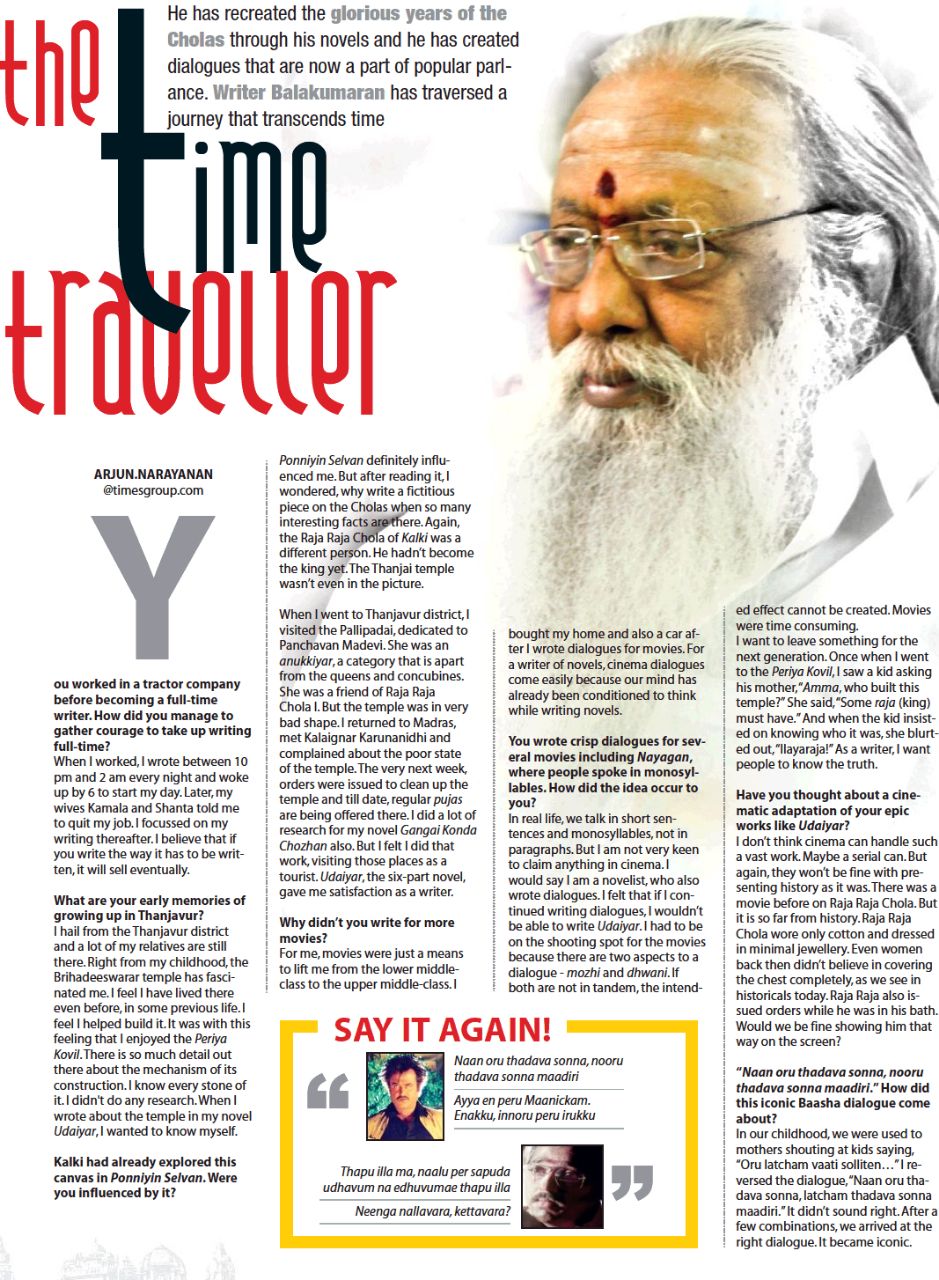 What are your early memories of growing up in Thanjavur?

Right from the early days, the Brihadeeswarar temple has held me in fascination. I feel I have lived there even before, in some previous life. I feel I helped build it. There was this officer in the Chola period and I feel I worked under him. It was with this feeling that I enjoyed the Periya Kovil. There is so much detail out there about the mechanism of its construction. I know every stone of it. I didn’t do any research. I had a craving for the past. When I wrote about the temple in my novel Udaiyar, I wanted to know myself.

Kalki had already explored this canvas with Ponniyin Selvan. Were you influenced by it?

Ponniyin Selvan definitely influenced me. But after reading it, I wondered, why write a fictitious piece on the Cholas when so many interesting facts are there. Again, the Raja Raja chola of Kalki was a different person. He hadn’t become the king yet. The Thanjai temple wasn’t even in the picture. When I went to the Thanjavur district, I visited the Pallipadai, dedicated to Panchavan Madevi. She was an anukkiyar, a category that is apart from the queens and concubines. She was a friend of Raja Raja Chola I. But the temple was in very bad shape. Vegetable shrubs were growing in the compound distressed, I kicked up a fuss there but I was not taken seriously.

I returned to Madras, met Kalaignar Karunanidhi and complained about the poor state of the temple. The very next week, orders were issued to clean up the temple and till date, regular pujas are being offered there.

Panchavan Madevi is alive there for me. If you look at the paintings there, each face is unique. Whoever did it, has worked on it with real faces. I did a lot of research for my novel Gangaikonda Chozhan also. But I felt I did that work, visiting those places as a tourist. Udaiyar, a six-part novel, gave me satisfaction as a writer.

Why didn’t you take stint in cinema very seriously?

For me, movies was just a means to lift me from the lower middle-class to the upper middle-class. I bought my home and a car after I wrote dialogues for movies. For a writer of novels, cinema dialogues come easily because our mind has already been conditioned to think while writing novels.

You brought in crisp dialogues, where people spoke in monosyllables with Nayagan, which later became the norm in movies. How did the idea occur to you?

In real life, we talk in short sentences and syllables; not in paragraphs. But I am not going to claim anything in cinema; I would say I also did that along with my writing. I felt that if I continued writing dialogues, I wouldn’t be able to write Udaiyar. I had to be on the shooting spot for the movies because there are two aspects to a dialogue – mozhi and dhwani. If both are not in tandem, the intended effect cannot be created through a dialogue. And writing wasn’t an occupation for me; it is me. I want to leave something for the next generation. Once I went to The Periya Kovil and one kid asked his mother. “Amma, who built this temple?” She said. “Some raja (king) must have.” And when the kid insisted on knowing who it was, she blurted out, “Ilayaraja!” As a writer, I want people to know the truth.

I never thought while writing Nayagan or Baasha that these movies would become landmarks. You can never plan a landmark or blockbuster. They just happen

Have you thought about a cinematic adaptation of your epic works like Udaiyar?

I don’t think cinema can handle such a vast work. May be, a serial can. But again, they won’t be fine with presenting history as it was. There was a movie before on Raja Raja Chola starring Sivaji Ganesan. But it is so far from history. Raja Raja Chola only wore cotton and not satin and silk and he had minimal jewellery on his body.

Even the women back weren’t held up by notions of covering the chest completely as we see in historicals today. Raja Raja also issued orders while he was in his bath. Would we be fine showing him that way on the screen?

You worked in a tractor company before being a full-time writer. How did you manage to gather courage to take up writing full-time?

When I worked, I wrote between 10pm and 2am every night and woke up by 6 to start my day. This went on. But you need a dying desire to get your work done and succeed. My wives Kamala and Shanta told me to quit my job. I focussed on my writing thereafter. I have never been a communist writer. I feel every writer needs working comfort. I believe that if you write the way it has to be written, it will sell eventually.