The receptionist at the Alwar Lake Palace informed us that the tiger reserve would close by 3.30 pm, without lifting his head from the register. I looked at my watch. It was 2 pm. “The boating on Alwar lake will go on till 5.30 pm,” he continued as he turned to other customers who seemed more worthy of attention. We looked at one another and decided to check in only after returning from the tiger reserve.

We drove towards Sariska. At the entrance, we were a bit alarmed when we heard the high rates for a Maruti gypsy. A long-lost relative of my friend Abhinav in the Forest Department was re-discovered at just the right moment and we then got the rates reduced. The jeep safari now began and we were told the do’s and don’ts of a safari. “Don’t spill anything in the forest. Don’t carry plastic bags with you,” said the guide. The jeep moved into the jungle.

The trip reminded us of what we had see on the National Geographic channel umpteen times on television. “You’ll be lucky to see a tiger sirji. It comes out rarely and only fortunate ones get to see it,” said our guide.

“How many tigers are there in this reserve?” asked Hemanth, the third person in our group.

“There are three for sure. Two more have been brought. Two are tigresses and one is a tiger” he replied. “Woh dekho!” he exclaimed. “It is an antelope”.

That was it. Not a tiger. Through the rest of the journey we got used to his excited exclamations at the sight of wild buffaloes, dotted deer and antelopes.

Soon we reached a pond, where animals gathered to drink water. Spotted deer and antelopes kept popping in and out. But the tiger remained elusive. Photographs were taken relentlessly. We then reached an area where we were asked to alight from the jeep and were taken to a cottage that had deer horns and pug marks of various animals on display.

A few foreigners later joined us as the gypsy resumed. The Gypsy took a turn and we reached a spot which looked right out of some Hollywood adventure film, in the middle of the dense, breathtaking jungle. “Two days ago, we saw a tiger resting there” said the guide, pointing to a rock cliff. “When we reached, he became alert and we stopped the Gypsy”.

It seemed that the man was feeling guilty for not being able to show us a tiger. He was building up a virtual one with his endless tales. “When a tiger comes, we stop the Gypsy. Then we move backward because it is against the instinct of a tiger to be the first to take a backward step. Once it is fully assured that we will not attack it, it will move away,” he said.

Our guide found out that a python was resting somewhere nearby. He drove towards that spot. The foreigners whom we had seen some time ago had reached before us and were staring at the python. We drove near it. It was resting for the day, after having swallowed something heavy. Suddenly it moved and raised its body, giving Hemanth a shock.

“What to do sirji, sometimes people come without being able to see anything. Once Rajiv Gandhi came here. He too went back without seeing the tiger. The tiger has its way sir. Some who are lucky get a glimpse,” our guide said. The man showed us every living creature in the jungle except the tiger. We were a tad disappointed. 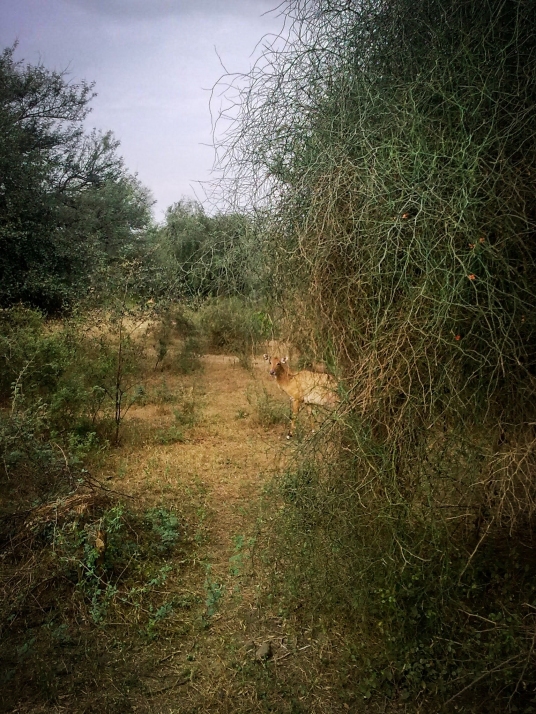 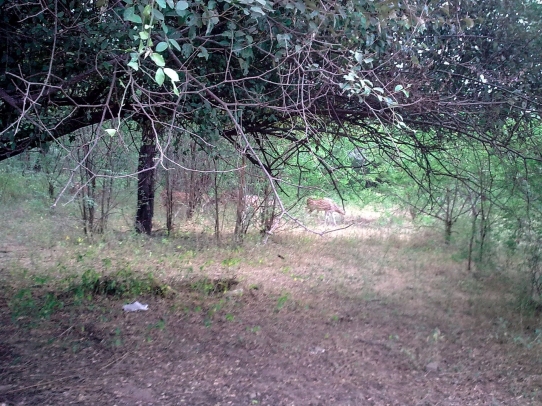 Suddenly someone came speeding along on a bicycle and exchanged some urgent words in broken Rajasthani with the guide. He passed on some directions hurriedly to the driver.

“What happened?” I asked. “Tiger… Tiger! A tiger is there perhaps. You are not that unlucky sirji!” he replied. Suddenly a tingle of excitement shot up my spine. The Gypsy sped on ferociously.

We held on to our seats to keep from falling off. I raised my voice to ask him something but he quietened me saying, “Shhh… you should not speak here. The tiger can be anywhere here. It will run away if it hears the human voice,” he whispered. I turned to the side and something caught my eye. It was a carcass. The remains of a deer lay there, eaten by a tiger.

The gypsy trailed slowly over the pathway. The three of us looked in three different directions trying to catch a glimpse of the tiger. It was getting dark and visibility was low. “There it is!” someone exclaimed. I could see a yellow pattern moving behind the bush. The vehicle reached a clearing and there it was — a few spotted deer!

“Sirji it is getting late now. We are not allowed to roam beyond this time. We have to return,” our guide said. “Show us a tiger! Why else have we come here?” said Hemanth desperate and dejected. “Sirji it is a matter of luck,” our guide said, once again telling us the Rajiv Gandhi story. We finally returned. It was quite an evening.

Twilight had set in and as we moved away in our cab, I saw the silhouette of the gypsy disappear into the gathering darkness. After we returned to Chennai, I got to know that tigers vanished from Sariska in the early 2000s due to poaching. Efforts were made to relocate tigers later. And the guide? He must be busy faking yet another search.

This was published in 2010 in The New Sunday Express