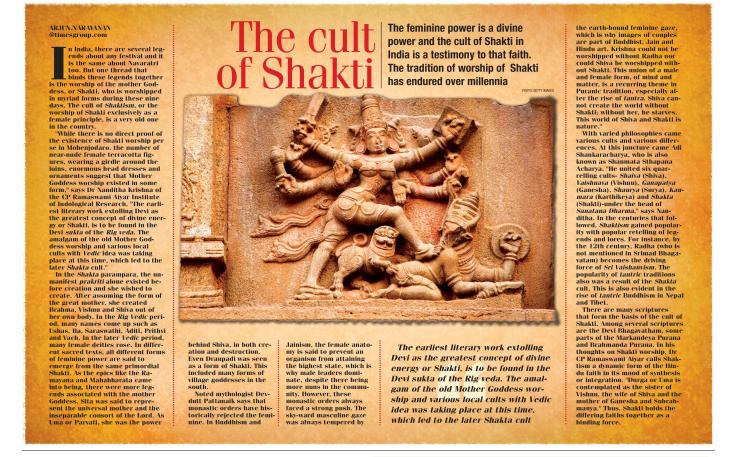 In India, there are several legends about any festival and it is the same about Navaratri too. But one thread that binds these legends together is the worship of the mother Goddess, or Shakti, who is worshipped in myriad forms during these nine days. The cult of Shaktism, or the worship of Shakti exclusively as a female principle, is a very old one in the country.

“While there is no direct proof of the existence of Shakti worship per se in Mohenjodaro, the number of near-nude female terracotta figures, wearing a girdle around the loins, enormous head dresses and ornaments suggest that Mother Goddess worship existed in some form,” says Dr Nanditha Krishna of the CP Ramaswami Aiyar Institute of Indological Research. “The earliest literary work extolling Devi as the greatest concept of divine energy or Shakti, is to be found in the Devi sukta of the Rig veda. The amalgam of the old Mother Goddess worship and various local cults with Vedic idea was taking place at this time, which led to the later Shakta cult.”

In the Shakta parampara, the unmanifest prakriti alone existed before creation and she wished to create. After assuming the form of the great mother, she created Brahma, Vishnu and Shiva out of her own body. In the Rig Vedic period, many names come up such as Ushas, Ila, Saraswathi, Aditi, Prithvi and Vach. In the later Vedic period, many female deities rose. In different sacred texts, all different forms of feminine power are said to emerge from the same primordial Shakti. As the epics like the Ramayana and Mahabharata came into being, there were more legends associated with the mother Goddess. Sita was said to represent the universal mother and the inseparable consort of the Lord. As Uma or Parvati, she was the power behind Shiva, in both creation and destruction. Even Draupadi was seen as a form of Shakti. This included many forms of village goddesses in the south.

Noted mythologist Devdutt Pattanaik says that monastic orders have historically rejected the feminine. In Buddhism and Jainism, the female anatomy is said to prevent an organism from attaining the highest state, which is why male leaders dominate, despite there being more nuns in the community. However, these monastic orders always faced a strong push. The sky-ward masculine gaze was always tempered by the earth-bound feminine gaze, which is why images of couples are part of Buddhist, Jain and Hindu art. Krishna could not be worshipped without Radha nor could Shiva be worshipped without Shakti. This union of a male and female form, of mind and matter, is a recurring theme in Puranic tradition, especially after the rise of tantra. Shiva cannot create the world without Shakti; without her, he starves. This world of Shiva and Shakti is nature.”
With varied philosophies came various cults and various differences. At this juncture came Adi Shankaracharya, who is also known as Shanmata Sthapana Acharya. “He united six quarrelling cults- Shaiva (Shiva), Vaishnava (Vishnu), Ganapatya (Ganesha), Shaurya (Surya), Kaumara (Karthikeya) and Shakta (Shakti)-under the head of Sanatana Dharma,” says Nanditha. In the centuries that followed, Shaktism gained popularity with popular retelling of legends and lores. For instance, by the 12th century, Radha (who is not mentioned in Srimad Bhagavatam) becomes the driving force of Sri Vaishanvism. The popularity of tantric traditions also was a result of the Shakta cult. This is also evident in the rise of tantric Buddhism in Nepal and Tibet.

There are many scriptures that form the basis of the cult of Shakti. Among several scriptures are the Devi Bhagavatham, some parts of the Markandeya Purana and Brahmanda Purana. In his thoughts on Shakti worship, Dr CP Ramaswami Aiyar calls Shaktism a dynamic form of the Hindu faith in its mood of synthesis or integration. “Durga or Uma is contemplated as the sister of Vishnu, the wife of Shiva and the mother of Ganesha and Subrahmanya.” Thus, Shakti holds the differing faiths together as a binding force.

This story was published on the first day of Navratri 2018 in The Times of India, Chennai