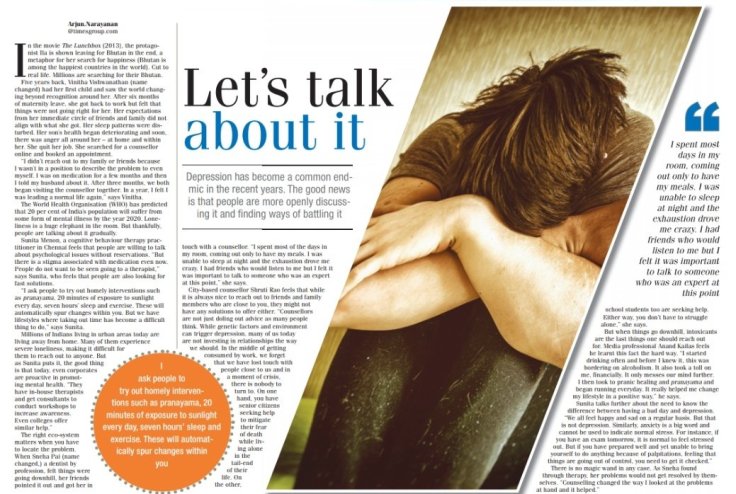 In the movie The Lunchbox (2013), the protagonist Ila is shown leaving for Bhutan in the end, a metaphor for her search for happiness (Bhutan is among the happiest countries in the world). Cut to real life. Millions are searching for their Bhutan.

Five years back, Vinitha Vishwanathan (name changed) had her fi rst child and saw the world changing beyond recognition around her. After six months of maternity leave, she got back to work but felt that things were not going right for her. Her expectations from her immediate circle of friends and family did not align with what she got. Her sleep patterns were disturbed. Her son’s health began deteriorating and soon, there was anger all around her – at home and within her. She quit her job. She searched for a counsellor online and booked an appointment.

“I didn’t reach out to my family or friends because I wasn’t in a position to describe the problem to even myself. I was on medication for a few months and then I told my husband about it. After three months, we both began visiting the counsellor together. In a year, I felt I was leading a normal life again,” says Vinitha.

The World Health Organisation (WHO) has predicted that 20 per cent of India’s population will suffer from some form of mental illness by the year 2020. Lone-
liness is a huge elephant in the room. But thankfully, people are talking about it gradually.

Sunita Menon, a cognitive behaviour therapy practitioner in Chennai feels that people are willing to talk about psychological issues without reservations. “But there is a stigma associated with medication even now. People do not want to be seen going to a therapist,” says Sunita, who feels that people are also looking for fast solutions. “I ask people to try out homely interventions such as pranayama, 20 minutes of exposure to sunlight every day, seven hours’ sleep and exercise. These will automatically spur changes within you. But we have lifestyles where taking out time has become a difficult thing to do,” says Sunita.

Millions of Indians living in urban areas today are living away from home. Many of them experience severe loneliness, making it diffi cult for them to reach out to anyone. But as Sunita puts it, the good thing
is that today, even corporates are proactive in promoting mental health. “They have in-house therapists and get consultants to conduct workshops to increase awareness. Even colleges offer similar help.”

The right eco-system matters when you have to locate the problem. When Sneha Pai (name changed,) a dentist by profession, felt things were going downhill, her friends pointed it out and got her in touch with a counsellor. “I spent most of the days in my room, coming out only to have my meals. I was unable to sleep at night and the exhaustion drove me crazy. I had friends who would listen to me but I felt it was important to talk to someone who was an expert at this point,” she says.

City-based counsellor Shruti Rao feels that while it is always nice to reach out to friends and family members who are close to you, they might not have any solutions to offer either. “Counsellors are not just doling out advice as many people think. While genetic factors and environment can trigger depression, many of us today are not investing in relationships the way we should. In the middle of getting consumed by work, we forget that we have lost touch with people close to us and in a moment of crisis, there is nobody to turn to. On one hand, you have senior citizens seeking help to mitigate their fear of death while living alone in the tail-end of their life. On the other, school students too are seeking help. Either way, you don’t have to struggle alone,” she says.

But when things go downhill, intoxicants are the last things one should reach out for. Media professional Anand Kailas feels he learnt this fact the hard way. “I started drinking often and before I knew it, this was bordering on alcoholism. It also took a toll on me, fi nancially. It only messes our mind further. I then took to pranic healing and pranayama and began running everyday. It really helped me change my lifestyle in a positive way,” he says.

Sunita talks further about the need to know the difference between having a bad day and depression. “We all feel happy and sad on a regular basis. But that is not depression. Similarly, anxiety is a big word and cannot be used to indicate normal stress. For instance, if you have an exam tomorrow, it is normal to feel stressed out. But if you have prepared well and yet unable to bring yourself to do anything because of palpitations, feeling that things are going out of control, you need to get it checked.”

There is no magic wand in any case. As Sneha found through therapy, her problems would not get resolved by themselves. “Counselling changed the way I looked atthe problems at hand and it helped.”