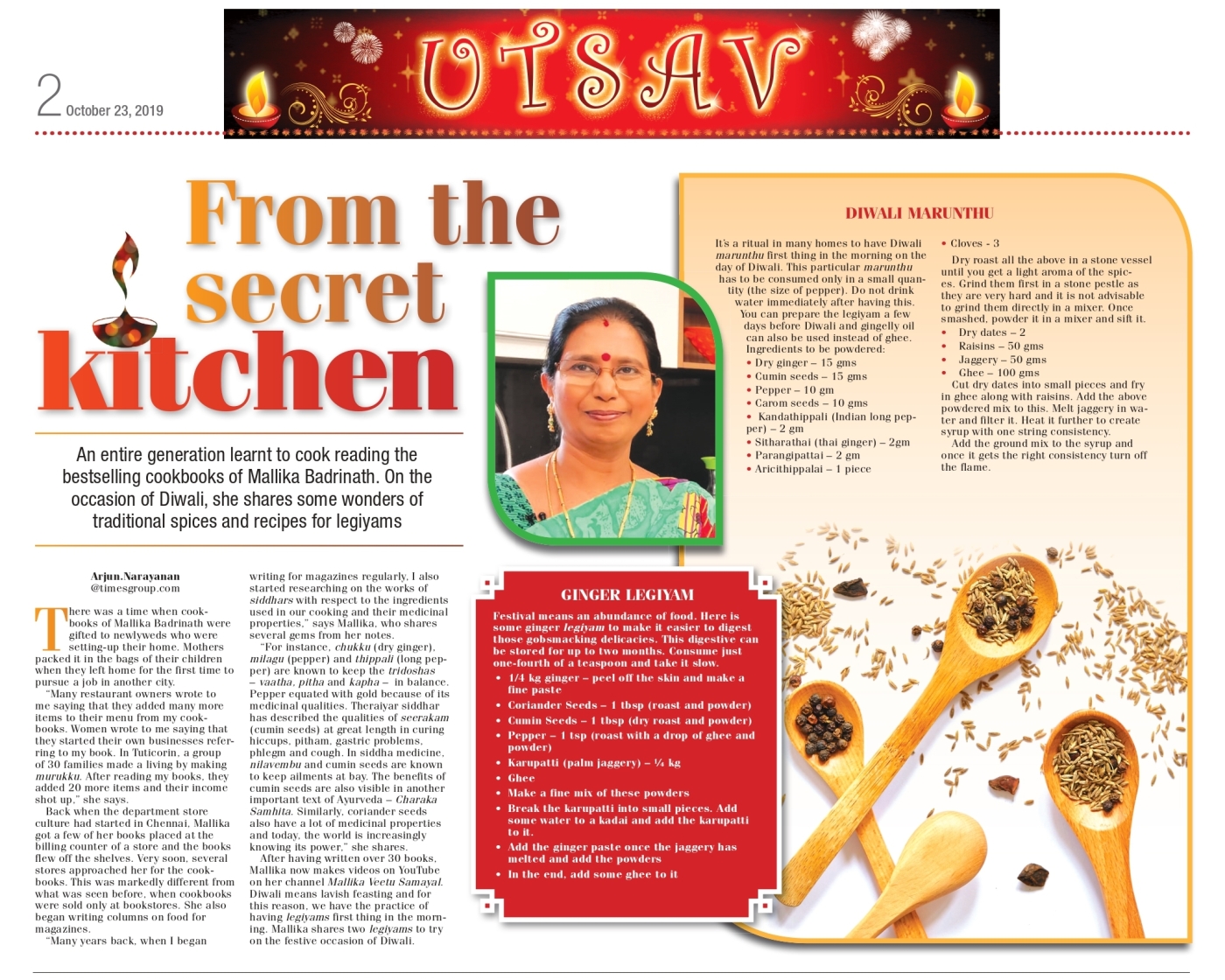 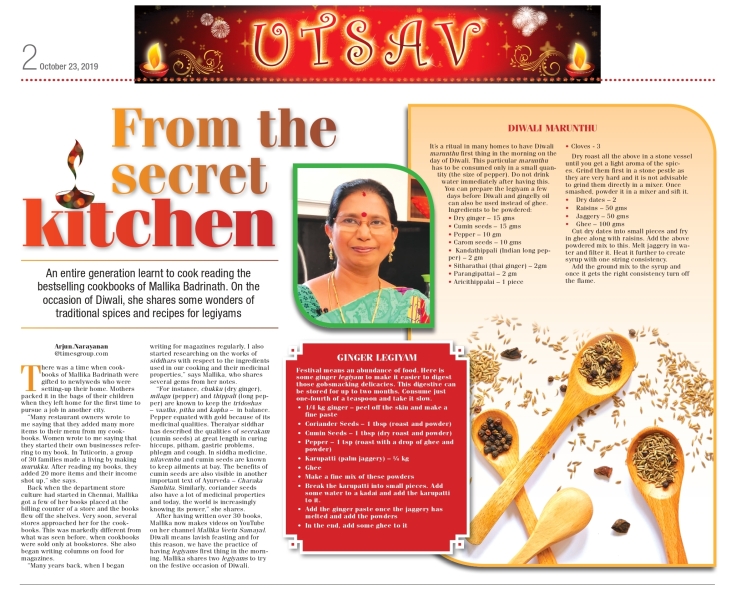 There was a time when cookbooks of Mallika Badrinath were gifted to newlyweds who were setting-up their home. Mothers packed it in the bags of their children when they left home for the first time to pursue a job in another city.

“Many restaurant owners wrote to me saying that they added many more items to their menu from my cookbooks. Women wrote to me saying that they started their own businesses referring to my book. In Tuticorin, a group of 30 families made a living by making murukku. After reading my books, they added 20 more items and their income shot up,” she says.

Back when the department store culture had started in Chennai, Mallika got a few of her books placed at the billing counter of a store and the books flew off the shelves. Very soon, several stores approached her for the cookbooks. This was markedly different from what was seen before, when cookbooks were sold only at bookstores. She also began writing columns on food for magazines.

“Many years back, when I began writing for magazines regularly, I also started researching on the works of siddhars with respect to the ingredients used in our cooking and their medicinal properties,” says Mallika, who shares several gems from her notes.

“For instance, chukku (dry ginger), milagu (pepper) and thippali (long pepper) are known to keep the tridoshas – vaatha, pitha and kapha –  in balance. Pepper equated with gold because of its medicinal qualities. Theraiyar siddhar has described the qualities of seerakam (cumin seeds) at great length in curing hiccups, pitham, gastric problems, phlegm and cough. In siddha medicine, nilavembu and cumin seeds are known to keep ailments at bay. The benefits of cumin seeds are also visible in another important text of Ayurveda – Charaka Samhita. Similarly, coriander seeds also have a lot of medicinal properties and today, the world is increasingly knowing its power,” she shares.

After having written over 30 books, Mallika now makes videos on YouTube on her channel Mallika Veetu Samayal. Diwali means lavish feasting and for this reason, we have the practice of having legiyams first thing in the morning. Mallika shares two legiyams to try on the festive occasion of Diwali.

Festival means an abundance of food. Here is some ginger legiyam to make it easier to digest those gobsmacking delicacies. This digestive can be stored for up to two months. Consume just one-fourth of a teaspoon and take it slow.

It’s a ritual in many homes to have Diwali marunthu first thing in the morning on the day of Diwali. This particular marunthu has to be consumed only in a small quantity (the size of pepper). Do not drink water immediately after having this. You can prepare the legiyam a few days before Diwali and gingelly oil can also be used instead of ghee.

Ingredients to be powdered:

Dry roast all the above in a stone vessel until you get a light aroma of the spices. Grind them first in a stone pestle as they are very hard and it is not advisable to grind them directly in a mixer. Once smashed, powder it in a mixer and sift it.

Cut dry dates into small pieces and fry in ghee along with raisins. Add the above powdered mix to this. Melt jaggery in water and filter it. Heat it further to create syrup with one string consistency.

Add the ground mix to the syrup and once it gets the right consistency turn off the flame.

One thought on “From the secret kitchen of Mallika Badrinath”