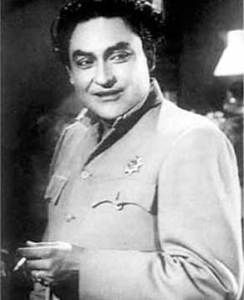 In 1935, Himanshu Rai was shooting Jeevan Naiyya. In a quick turn of events, his wife and the movie’s heroine Devika Rani eloped with the lead actor. Devika was traced and the actor fired. Search for a new actor began, the trail of which stopped at the lab assistant of the studio Kumudlal Ganguly. Kumudlal’s father was dead oppos

ed to his son becoming an actor but relented after Himanshu Rai convinced him that Bombay Talkies housed only artists from good families. The lab assistant donned the grease paint and soon after in 1936 came Achut Kanya from the same team. Indian cinema had now discovered a new sensation called Ashok Kumar.

With Devika Rani in Achut Kanya, a landmark of Hindi cinema
Those were the days when prostitutes became actresses and pimps starred alongside. In such a time, the likes of Ashok Kumar, Durga Khote and Shobana Samarth, coming from families of lawyers and doctors, brought a whirlwind change to Hindi filmdom. Ashok Kumar continued to star alongside Devika Rani but won recognition in a series of successes with Leela Chitnis in the late 1930s like Kangan, Jhoola and Bandhan. In 1943, Ashok became a star nonpareil with a break through the roof success of Gyan Mukherjee’s Kismet, which ran for three long years in Roxy Cinemas in Calcutta. Ashok Kumar played the pipe smoking anti-hero with panache and the image got fixed for decades to come.
But after the death of Himanshu Rai, things were not the same in Bombay Talkies. Devika Rani ‘s iron-fisted ways made the artists part ways with the studio and Ashok Kumar too moved on with Shashadhar Mukherjee, who founded Filmistan. He could never forget that Bombay Talkies made him the star he was and he bought over Bombay Talkies. To pay off its debts, he produced a few movies, most notably the blockbuster Mahal (1949), which catapulted Madhubala to instant stardom.
Even in the air of uninhibited romantic affairs that filled the film industry, Ashok Kumar was quite averse to female fan following initially but developed feet of clay for the charm of Nalini Jaywant and strayed for once outside marriage. The affair ended rather soon.
Through the fifties, he held his might against the rising tirade of the trinity Raj Kapoor, Dilip Kumar and Dev Anand. Indeed, age seemed to have no impact on him and he got a variety of roles like no one. He took the cinemagoers on a laughter ride in Chalti ka naam Gaadi (1958), danced along with Madhubala in the night clubs of Howrah Bridge (1958), endured an unfaithful wife in Gumraah (1963), matched the pathos of Nutan in Bandini (1964), learnt spiritual lessons from a courtesan in Chitralekha (1964), portrayed a devious thug with élan in Jewel Thief (1967) and won a National Award for playing a man of principles in Aashirwaad (1968). By the end of sixties, Ashok Kumar had gracefully transformed into a character artist, without a significant gap in his career.
The saga went unabated in the 1970s where he played an affectionate, light-hearted uncle and father to the hilt, the pinnacle of which was Hrishikesh Mukherjee’s Khoobsurat (1980). No one had ever exuded such vulnerability and pleasantry playing a hen-pecked husband and being quite glad about it. By now, he had romanced on-screen ladies from Devika Rani to Rati Agnihotri! 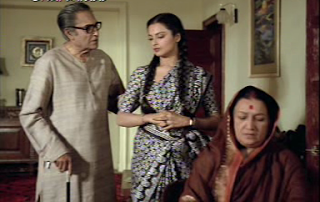 The patriarch of Khoobsurat, with Rekha and Dina Pathak
In 1983, when the first weekly soap Hum Log was launched on Doordarshan, this mantle of a patriarch was moved to television and he played the sutradhaar, encapsulating the essence of every episode. In fact, Ashok Kumar so effortlessly made a move to television and won over the younger audience, when most cine stars of the day failed to understand its potential. He played the eponymous Bahadur Shah Zafar in B.R.Chopra’s television offering. The melancholy of the character seemed to emanate from his self, echoing the dying voice of an artist who once ruled the cine screen. Meanwhile, he also successfully dabbled with painting and homeopathy!
He had successfully sung his songs, made blockbusters as a producer, won accolades as an actor, starred in numerous plays and endeared himself to the masses as a television anchor. There was an effortlessness which emanated from his performance, for he easily weaved an unmatched spontaneity into the most rehearsed performances. The Dada Saheb Phalke award in 1988 was perhaps only a token of appreciation for Dadamoni, as he was lovingly referred to. He passed away in 2001, having seen the cine world from the birth of talkies to the new millennium. This year marks his centenary. There is no one single image of Dadamoni in our collective memory. He meant different things to different people born between the 1930s and 1980s, for his repertoire still seems unfailingly kaleidoscopic and human.
(This article was published in The New Sunday Express)