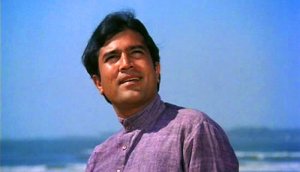 “Babumoshai! Zindagi badi honi chahiye, lambi nahi” he snapped playfully in his intro scene and set the tempo for the story. People laughed through the movie and didn’t even realise when their eyes got moistened uncontrollably as they left the theatres. In the late 1960s, Raj Kapoor fell seriously ill and his friend Hrishikesh Mukherjee was overcome by an undue fear that he would die. This sense of loss of a friend and the thought of how he would have welcomed death led to the birth of a character whom we today know as Anand.

It is a challenge to write about Anand, not because it is a complicated movie. In fact, it is very simple in its telling and the climax is obvious. But Anand is not a movie. It is a celebration of life. Rajesh Khanna played Anand Sehgal, a cancer patient who comes to live in Bombay, not to get treated, but simply to be with a few people, spread joy and in the process, forget his own sorrows. He comes under the treatment of Dr. Bhaskar Banerjee (Amitabh Bachchan), a complete no-nonsense cynic, fatigued by the way things work in the world. Anand’s entry makes him see the positive side of life. Anand fixes Sanjay’s alliance with his silent love Renu and sings into the hearts of all those who come in touch with him with poetry, music and roars of laughter, so much so that even during his death all that is left behind is a trail of laughter. He lives even in his death.

Initially, Hrishikesh Mukherjee wanted Raj Kapoor himself to play Anand. Later Shashi Kapoor and Kishore Kumar were also considered for this role, which finally went to Rajesh Khanna. Hrishi Da is also supposed to have considered Uttam Kumar and Soumitra Chatterjee for the role of Anand and Bhaskar.

In the same year, Hrishikesh Mukherjee had another outing with Guddi, for which he wanted to cast Amitabh initially. But since Anand was already slated for a relrrel, he chose Samit Bhanja, as he wanted two new comers in the lead role (the other being Jaya Bhaduri).

Anand was released in 1971,  a little more than an year  after Rajesh Khanna was declared a superstar, with his Aradhana breaking through the roof of the box office in the Diwali of 1969.

Rajesh Khanna easily got into the soul of Anand and brought it alive for us to see, have fun with, fret over and mourn. There is not a momentary lapse in his portrayal of the eternal goner. This was his show all through the way. Incidentally, this was Rajesh Khanna’s second ‘cancer patient’ role in less than an year. The audience had already shed loads of tears watching him die in Asit Sen’s Safar (co-starring Sharmila Tagore) in 1970. Amitabh had a big break with Anand, whose Saat Hindustani and Reshma aur Shera went without much success. The initial embers of the Angry young man were very much visible in Anand. Lalita Pawar as Matron D’sa made yet another memorable mark in her career playing the hard-faced but soft-hearted matron. The similarities with her role in Mukherjee’s Anari (1959) could not be missed out, however. 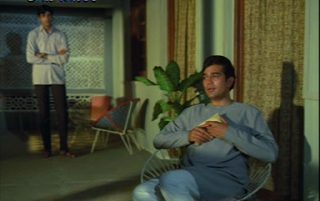 Anand is a Salil Chowdhary gem. Every song is like a beautiful painting, the image of which refuses to fade away. Whether it is the dulcet Main ne tere liye, the melancholic Kahin door jab din dhal jaye, the philosophical Zindagi kaisi hai paheli or the romantic Jiya Lage na, Salil Chowdhary surprisnglsu chose Mukesh instead of Kishore Kumar (who had become Rajesh Khanna’s voice post Aradhana) as he felt the melancholy of Anand could be brought out by no other singer.

Which other movie had a hero joking about his own fatal disease with such genuine ease? “Lymphosarcoma of the intestine! Wah! Beemari ho toh aisi ho… nahi toh na ho! “It helped that the dialogues were written by Gulzar, whose lines were simple and powerful. He walked away with the Filmfare award that year for Best Dialogue. Some of them stand out for their sheer magic.

Maut ek pal hai Babumoshai! Us ek pal ke darr se main lakhon pal jeena kyun chod doon? (Death is just a moment. Why should I stop living the lakhs of moments in between fearing that one moment)

In an age when rock n roll and the hippie culture was setting in, Rajesh Khanna single-handedly made kurta-pyjamas sexy and its sales grew by leaps and bounds overnight. In another three years, Hrishi da came up with the Rajesh-Amitabh duo in Namak Haram. But by then, Lady fortune had changed her preference. Amitabh had become the reigning star and Rajesh Khanna had become a fading star. Anand formed the pinnacle of Rajesh Khanna’s career. In 1972, he well-deservedly won the Filmfare trophy for Best Actor and Amitabh won the award for the Best Supporting actor. Hrishikesh Mukherjee won the award for Best Editing and Best Story.

In a matter of irony, Anand won the award for the Best Film and Raj Kapoor, to whom this film was dedicated to, won the Best Director award for Mera Naam Joker.

Anand was a tribute to the city of Bombay, to its open-heartedness and its cosmopolitan culture, which gives space to everyone. Anand is a tale of human relationships; a story of putting up a strong and joyous face in the wrost of adversities. Anand leaves a trail of bliss in the lives of all he touches and a lump in throat of all those who see him die. It was only a genius like Hrishikesh Mukherjee who could have pulled off this work with such elacrity for he knew to tell simple matters in a simple way, which is not so simple! 33 years later, this character inspired Karan Johar’s Kal Ho Na Ho. As Amitabh said towards the end “Anand mara nahi, Anand marte nahi”

6 thoughts on “Laughing all the way to death in Anand”