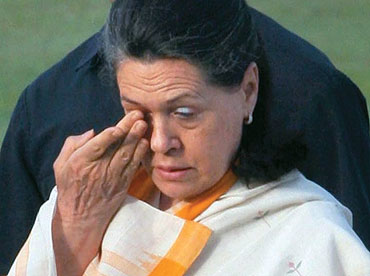 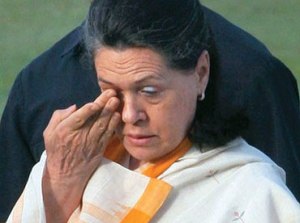 Sonia Gandhi wept on seeing the photos of the Batla House encounter, if we are to believe the statement of the Law Minister Salman Khursheed. How sad for Her Highness Madame Sonia to have shed tears for the hapless men, outrageously labeled as terrorists, by our devilish police force. The act of our policemen can put the villainous policemen of the cheap Hindi flicks of 1980s to shame. So many deaths have paralysed this nation. There were hundreds of deaths as terror struck the Mumbai local trains, the temples of Varanasi, the Ajmer Dargah, umpteen crowded markets on festive occasions and of course, the 26/11 killings at the Taj. Khursheed did not mention any of them. The perpetrators of these acts have either not been caught or are having a jolly good time in our prisons. But our nation is run by those who shed tears for the terrorists rather than the terrorized. Digvijay Singh, the upholder of the dynasty dharma soon chipped in to rescue saying Madam never cried. Meanwhile, Madam never spoke.

Robert Vadara has suddenly emerged as a new player in the national politics. Astride on his bike, his comments were capable of inspiring the script writers of political dramas. He has signaled his political ambitions and his children are now being sashayed around with pride. The sixth generation of the Gandhis has been launched during the UP elections and the tiny tots are getting used to being garlanded and are waving joyously at boisterous rallies. Indians, who grow up on stories of rajas, ranis, rajkumars and rajkumaris, quite like to see some in real life too. The Gandhis are only eager to oblige. Very soon we will find Barkha Dutt interviewing the kids, who might ascend the throne of India two decades from now.

Vijay Mallaya wants the help of the government and the public sector banks in helping his Kingfisher fly again. The airline was launched with much noise and fanfare, when Mallaya thought of redefining luxury for Indians. But reality clipped the flight of his dreams and the airline was pushed to the abysses of a budget airline. We didn’t complain when he blew up fortunes on panache and style as he positioned himself as India’s answer to Richard Branson, with private jets, islands and yes, plenty of girls. But sadly for him, style and glamour alone were not enough to run airlines. The Kingfisher’s wings have been clipped by its own master. Its staff has not been paid for the past few months. Now he wants the tax-paying public to pay for his stupidities. Hail capitalism to plunder wealth and turn the pages of socialism to seek cover. Meanwhile, the pilots of Air India, the biggest benefactor of India’s confused socialism, are contemplating yet another strike.

One thought on “Random Ruminations”