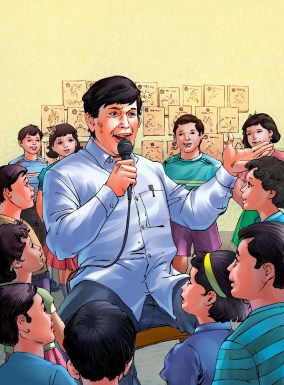 In the early days of my childhood, I depended solely on my mother for my quota of stories. She was the first story teller I knew. Though her knowledge of the epics was limited, she chipped in her own imaginary tales as she serialized the Ramayan while feeding me lunch everyday. My father once read out a piece on Mahatma Gandhi that appeared in the Saudi Gazette and I was introduced to a contemporary figure for the first time. It was during my winter holidays in my second grade that my uncle got me a copy of Amar Chitra Katha’s (ACK) Jataka Tales (The Giant and the Dwarf) and Tinkle. Those were the first books ever gifted to me and I got one of the best companions in my books.

Since then, I made it a point to religiously build my collection of ACK, starting with books like Vali, Surya, Indra and Shachi, Chanakya and most recently, Anant Pai. I recently happened to interview Reena Puri, the current Editor of ACK. As I spoke to her, I could not hold back my excitement while the ACK saga. The interview was about Anant Pai, the master storyteller and its founder, whom we knew better as Uncle Pai.

ACK is not merely a story book for me. ACK is a snapshot of my childhood. I’ve been extremely possessive about my ACK copies and refused to hand them over to my younger cousins or friends. Such has been my fixation with these books that even now I clearly remember the culprits who failed to return the ACK copies borrowed from me during my childhood. I owe my love for History purely to ACK for I discovered an enjoyable way of learning things. Science became fun with Anu Club and I made rapid progress in my English over the years reading those volumes. In fact, I owe my proficiency in the regional languages also to ACK, for I read many of its titles in Malayalam and Hindi. I strongly believe that there is no better way of acquainting the young minds with India’s rich cultural past, without a tinge of jingoism, than introducing them to the world of ACK.

Every time I go home, I pick up a few random copies from my shelf and go through them. Sometimes, the ACK copies look like a snapshot of my childhood, a piece of my past, that has trickled down to the present. I don’t know if it is nostalgia or the stories themselves that work wonders for me. Perhaps ACK still works for me because it follows a rare style of writing which pleases the kids and the grown-ups alike. The illustrations are well researched and are capable of transporting you to a different era. I wonder if our filmmakers could borrow a leaf from ACK on art direction and scripting. Most of the period dramas that have been aired on television have been of late quite forgettable. I have my personal favourites as well like Chanakya, for its pace, crisp dialogues and wel-researched costumes, Malavika, for the breezy manner in which the reader’s mind is treated to the joys and pangs of romance, Draupadi, for a fair portrayal of the greatest of our epic women, all the titles of Birbal for its wit and the entire volume of the Mahabharata which can any day give a tough fight to its counterpart on television for its research, execution and scripting. I’m sure every child who has read ACK has his or her personal favourite among the titles.

Of course the joy of Tinkle is a story in itself. Was any train journey complete without a copy of the Tinkle sold at the railway platforms? Tantri the MAntri, Shikari Shanbhu, Kapeesh, Ramu, Shamu, Little Raji, Pyarelal and Suppandi have become a part of our collective memories.

The recent issue on Uncle Pai is a warm and enjoyable work. It brought me closer to the person who touched my life and many others’ lives so deeply that people belonging to my generation owe a sense of nationalistic pride and thinking to the stories he brought alive in those umpteen volumes, each running into 32-pages. If nothing, it is the story of a man who walked alone with nothing but an enterprising spirit to build an empire in the world of comics