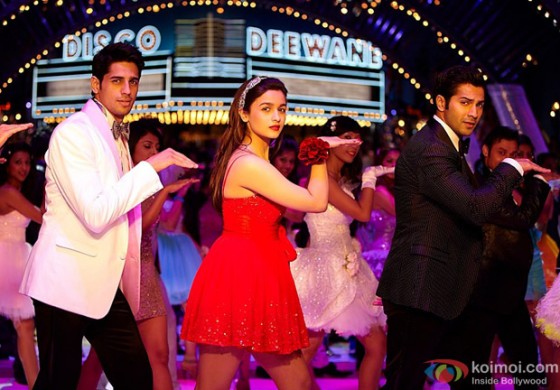 As I watched Karan Johar’s Student of the Year (SOTY), I pondered hard over something similar I had seen. I was reminded of my own high school days, when I used to be glued to the popular sitcom  Hip Hip Hurray. It showed a familiar scene from class 12, where, the kids from diverse backgrounds were good, mean, helpful, fun and bitchy; but they were teenagers, who behaved like one. They were seen fiddling with the idea of treats, parties, peer pressure, misunderstandings and basketball matches, but their stories also revolved around the classrooms, libraries and laboratories. One could easily identify at some level with its characters, which made the sitcom extremely popular among teenagers. There were nerds and playboys, but they were from a school campus – not from a fantasy Hogwarts from Dehradun.
Since I’m going to refer to SOTY, here is the brief outline. The story is set in St Teresa’s, a fictitious college in Dehradun and revolves around the lives of  Rohan Nanda (Varun Dhawan), son of a muti-millionaire industrialist, his girlfriend and classmate Shinaya (Alia Bhatt) and a middle-class boy Abhimanyu (Siddharth Malhotra). The love triangle between the three of them and the intense competition among all the kids in the campus to win the SOTY trophy sets the tone for the movie.
For a long time, the genre of high school romance hardly existed in Hindi cinema. It was Raj Kapoor who let loose a spirit of uninhibited frenzy with his teenage love story Bobby, where he launched real-life teenagers Rishi Kapoor and Dimple Kapadia and brought us to face the fact that hormones go loose as one crosses adolescence, when one is no more a child, but not quite an adult. That was the 1970s.
Today, when I watched Karan Johar’s Student of the Year (SOTY), I had problems with it every other minute. I had done my schooling in different countries and my high school years were replete with competition at every corner, with the so called best friends playing cheap games for the fear of you outscoring them and problems of relocation, that I had to handle at a personal level. But the only parameter of excellence was ‘Ratta maar’ or your ability to mug up and excel in exams. There were a few extra-curricular activities, but that was not what you were judged by at the end of the day. What mattered, was how you did in your board exams.
But Karan’s students seem to live in a space occupied by pure candy floss and fantasy. The richie kids (led by Rohan and his chamchas) come in Ferraris and the poor ones (like Siddharth) come riding sports bikes (a bad joke by Karan calls them Tata boys and Bata boys). All of them are mean and bitchy and their parents are even worse. One middle-class mother even constantly drives her daughter to use push-up bras to entice Rohan, so that she can have a safe future! One girl gets excited as she can cheer the boys’ football team and draw their attention. Shinaya, the leading lady, on the other hand, wants the guys to cheer her with cat calls and whistles. She breathes luxury brands and even shops some desi stuff to visit a friend’s dying grandmother! These 16 or 17 something kids do not fall under the restrictions of law to enter discos, drive fancy cars or try out some tequila shots at an upmarket pub. The guys have rippling muscles so finely toned that Hrithik or John might shirk in insecurity and the girls, with their Barbie-like bodies will make Sheilas and Chamelis suffer from an inferiority complex. The rich Rohan, as it should be, has problems with his father, who is plain devilish. The poor Siddharth, as is the norm in an average melodrama, is orphaned and hence is at the mercy of his acerbic relatives. Oh yes, they do give one exam, since Karan wants to remind us that it is a high school drama. But they are more busy preparing for their prom night, which is more of a deciding factor for them to win their trophy. Well, you might argue that kids in metros today, do live a large life, with the best of luxury. But then, this movie set 10 years back in time and is told entirely in flashback.
Karan Johar has seldom been associated with realism. So his movies are unapologetically entertaining and even the chawls and markets are stain-free and pleasing to the eyes. But then, entertainment can be aesthetic as well. I am definitely not among those who want every movie to be an arty work, appealing only to the festival audience. That will be the last thing required in a country as diverse as ours. We need variety. But it helps, if it is a little more real and we have had film makers striking that balance in movies like 3 Idiots, Barfi, The Dirty Picture and Vicky Donor, where films packed power, fun and aesthetics. SOTY works in parts and has its moments. There are situations, which seem genuine and the debut actors work well in their roles. They are sure to be heartthrobs, at least for some time to come. Karan Johar is now in a position to make heroes out of new comers and due credit has to be given to him for bringing new talents using the power that vests with him today. But then, the sour taste doesn’t go away, may be because I belong to the Bata club of SOTY. And the problem lies in the fact that Karan would never be able to think from a Bata kid’s perspective. It will always remain the undecipherable ‘other world’ for him.
As for myself, I returned home from the movie and watched a few episodes of  Hip Hip Hurray to feel good about my school life.

2 thoughts on “A few Bata club thoughts about SOTY”