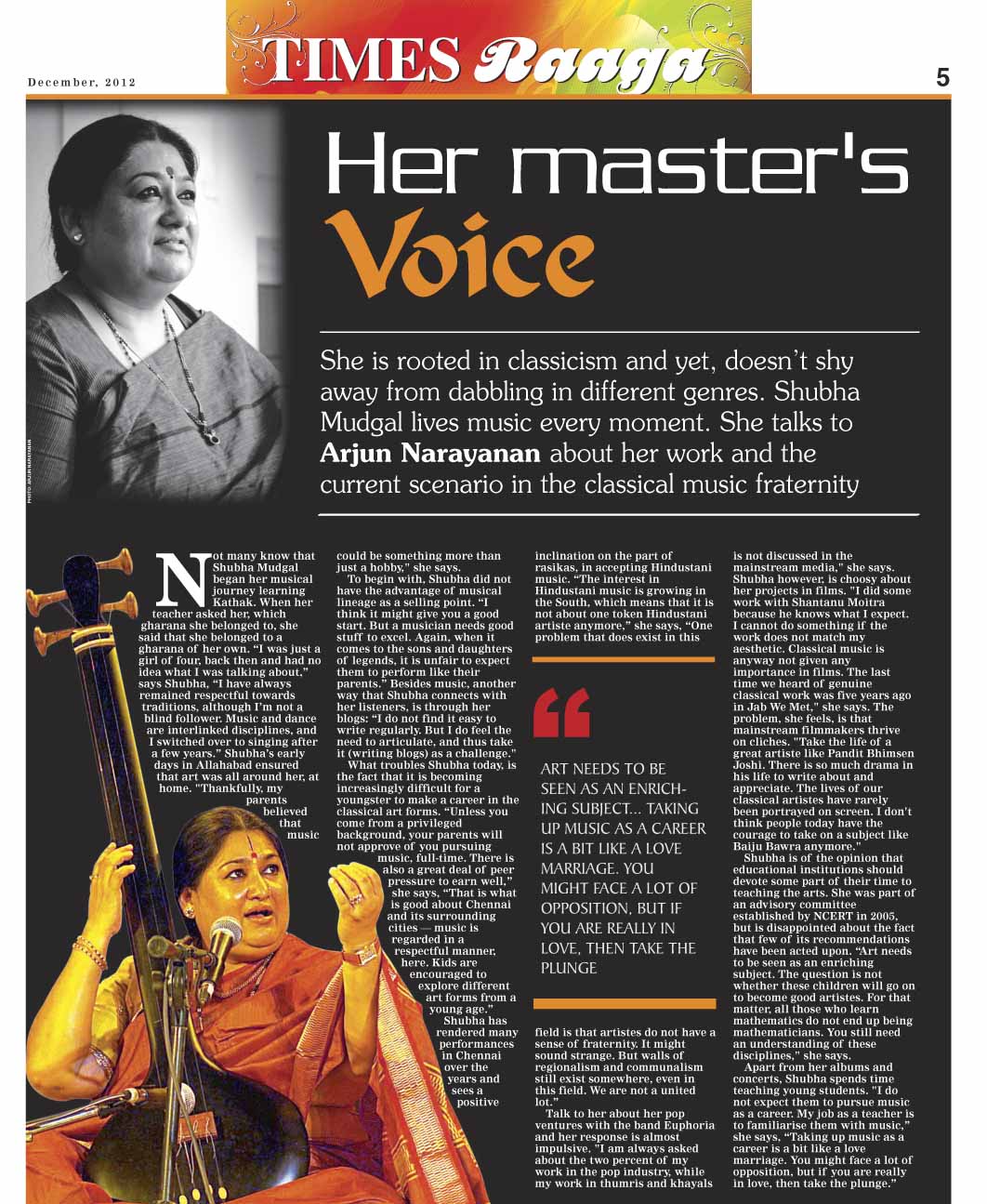 Mention the name of Bhimsen Joshi and an average music listener will immediately be reminded of Mile aur mera tumhara or Desh Raag, the constant filler videos on DD. For someone like me who grew up on a staple of music videos and albums in the 1990s, Shubha Mudgal’s name instantly reminded me of Ab ke sawan aide barse from Euphoria. While covering the ongoing Margazhi festival in Chennai, I got the opportunity to meet her. She spoke about her work in different genres, the real face of the music industry and her own experiences about teaching young students.
Not many know that Shubha Mudgal began her musical journey learning Kathak. When her teacher asked her, which gharana she belonged to, she said that she belonged to a gharana of her own. “I was just a girl of four, back then and had no idea what I was talking about,” says Shubha, “I have always remained respectful towards traditions, although I’m not a blind follower. Music and dance are interlinked disciplines, and I switched over to singing after a few years.”
Shubha’s early days in Allahabad ensured that art was all around her, at home. “Thankfully, my parents believed that music could be something more than just a hobby,” she says.
To begin with, Shubha did not have the advantage of musical lineage as a selling point. “I think it might give you a good start. But a musician needs good stuff to excel. Again, when it comes to the sons and daughters of legends, it is unfair to expect them to perform like their parents.” Besides music, another way that Shubha connects with her listeners, is through her blogs: “I do not find it easy to write regularly. But I do feel the need to articulate, and thus take it (writing blogs) as a challenge.”
What troubles Shubha today, is the fact that it is becoming increasingly difficult for a youngster to make a career in the classical art forms. “Unless you come from a privileged background, your parents will not approve of you pursuing music, full-time. There is also a great deal of peer pressure to earn well,” she says, “That is what is good about Chennai and its surrounding cities — music is regarded in a respectful manner, here. Kids are encouraged to explore different art forms from a young age.”
Shubha has rendered many performances in Chennai over the years and sees a positive inclination on the part of rasikas, in accepting Hindustani music. “The interest in Hindustani music is growing in the South, which means that it is not about one token Hindustani artiste anymore,” she says, “One problem that does exist in this field is that artistes do not have a sense of fraternity. It might sound strange. But walls of regionalism and communalism still exist somewhere, even in this field. We are not a united lot.”
Talk to her about her pop ventures with the band Euphoria and her response is almost impulsive. “I am always asked about the two percent of my work in the pop industry, while my work in thumris and khayals is not discussed in the mainstream media,” she says. Shubha however, is choosy about her projects in films. “I did some work with Shantanu Moitra because he knows what I expect. I cannot do something if the work does not match my aesthetic. Classical music is anyway not given any importance in films. The last time we heard of genuine classical work was five years ago in Jab We Met,” she says. The problem, she feels, is that mainstream filmmakers thrive on cliches.

“Take the life of a great artiste like Pandit Bhimsen Joshi. There is so much drama in his life to write about and appreciate. The lives of our classical artistes have rarely been portrayed on screen. I don’t think people today have the courage to take on a subject like Baiju Bawra anymore.”

Shubha is of the opinion that educational institutions should devote some part of their time to teaching the arts. She was part of an advisory committee established by NCERT in 2005, but is disappointed about the fact that few of its recommendations have been acted upon. “Art needs to be seen as an enriching subject. The question is not whether these children will go on to become good artistes. For that matter, all those who learn mathematics do not end up being mathematicians. But you still need an understanding of these disciplines,” she says.
Apart from her albums and concerts, Shubha spends time teaching young students. “I do not expect them to pursue music as a career. My job as a teacher is to familiarise them with music,” she says, “Taking up music as a career is a bit like a love marriage. You might face a lot of opposition, but if you are really in love, then take the plunge.”