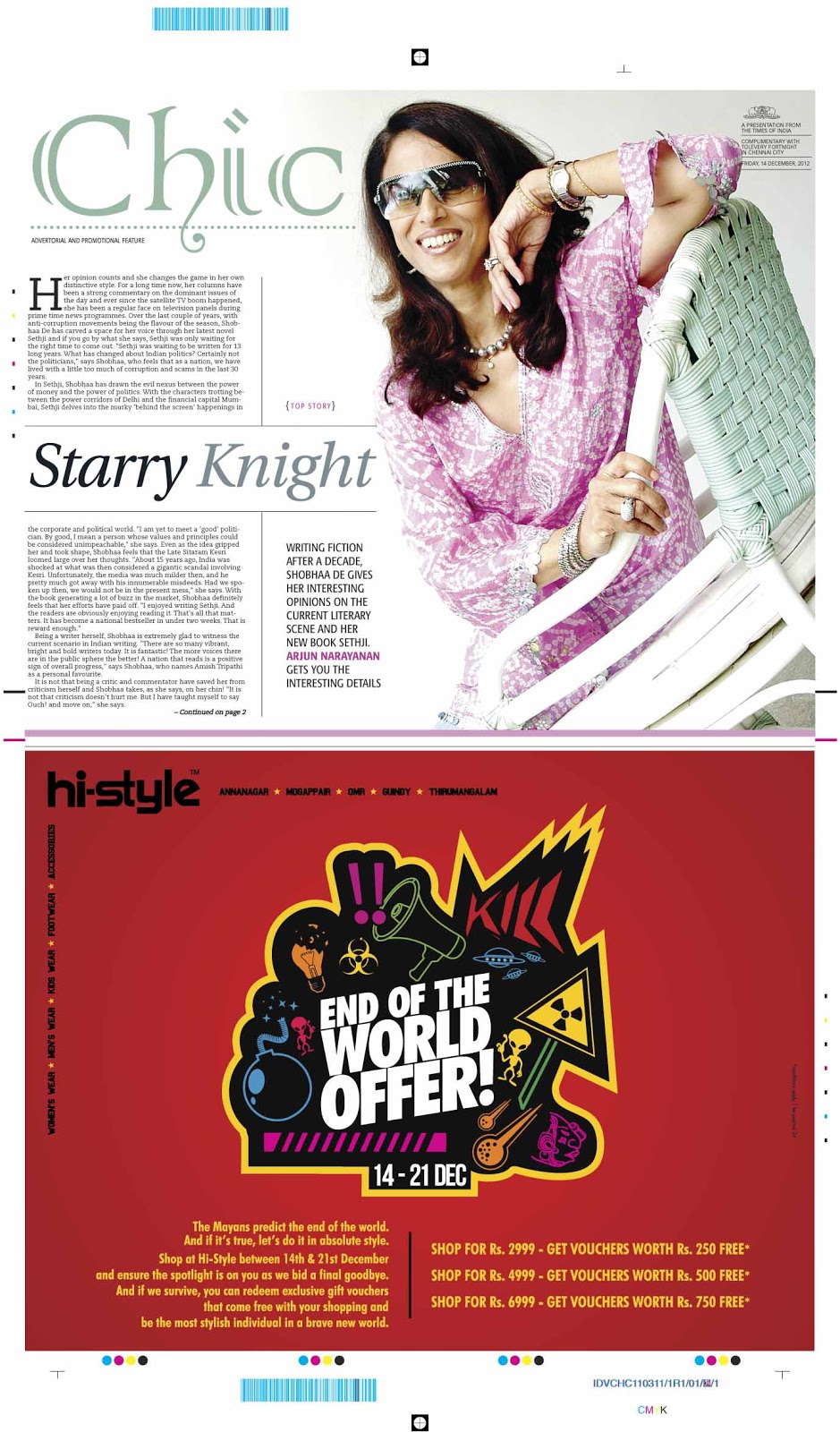 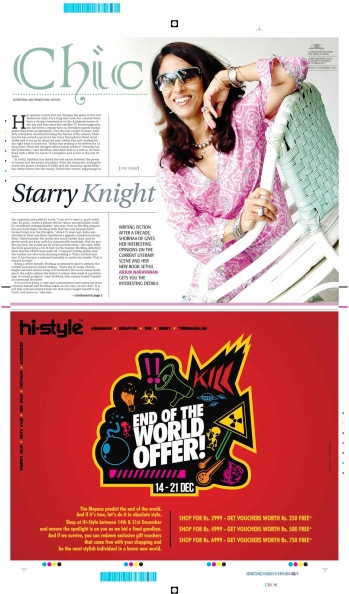 Her opinion counts and she changes the game in her own distinctive style. For a long time now, her columns have been a strong commentary on the dominant issues of the day and ever since the satellite TV boom has happened, she has been a regular face on television panels during prime time news programmes. Over the last couple of years, with anti-corruption movements being the flavour of the season, Shobhaa De too has carved her space for her voice through her latest novel Sethji and if you go by what she says, Sethji was only waiting for the right time to come out. “Sethji was waiting to be written for 13 long years. What has changed about Indian politics? Certainly not the politicians,” says Shobhaa, who feels that as a nation, we have lived with too much of corruption and scams for more than 30 years now.
In Sethji, Shobhaa has drawn the evil nexus between power of money and the power of politics. With the characters trotting between the power corridors of Delhi and the financial capital Mumbai, Sethji delves into the murky ‘behind the screen’ happenings in the corporate and political world. “I am yet to meet a ‘good’ politician. By good, I mean a person whose values and principles could be considered unimpeachable,” she says. Even as the idea gripped her and took shape, Shobhaa feels that the Late Sitaram Kesri loomed large over her thoughts. “About 15 years ago, India was shocked at what was then considered a gigantic scandal involving Kesri. Unfortunately, the media was much milder then, and he pretty much got away with his innumerable misdeeds. Had we spoken up then, we would not be in the present mess,” she says. With the book generating a lot of buzz in the market, Shobhaa definitely feels that her efforts have paid off. “I enjoyed writing Sethji. And the readers are obviously enjoying reading it. That’s all that matters. It has become a national bestseller in under two weeks. That is reward enough.”
Being a writer herself, Shobhaa is extremely glad to witness the current scenario in Indian writing. “There are so many vibrant, bright and bold writers today. It is fantastic! The more voices there are in the public sphere the better! A nation that reads is a positive sign of overall progress,” says Shobhaa, who names Amish Tripathi as a personal favourite.
It is not that being a critic and commentator have saved her from criticism herself and Shobhaa takes, as she says, on her chin! “It is not that criticism doesn’t hurt me. But I have taught myself to say Ouch! and move on,” says Shobhaa. The attitude of a critic goes back to her Stardust days, when she edited the popular film magazine way back in the 1970s. Such was the impact of her style on popular media that many imitations soon cropped up and Shobhaa also jocularly said that everything from politics and business to sports and films have been Stardustised. “It is flattering to know what began as an ‘ín joke’ more than 40 years ago has gone mainstream today,” she says, the glint of pride not missing.
Looking at film journalism today, Shobhaa makes no bones to say that it has become too commercially driven. “Today, film journalism is all linked to trade reports. Covers are flogged to the highest bidder. Stories are planted. It is PR-driven. There are zero exposes or investigative reports,” she says, though she is glad that things have been streamlined in the Hindi film industry. “The film industry has become far more professionalised. It runs like a corporate, which is a good thing. There is far more transparency and there are better systems in place.”
More than two decades ago, Shobhaa’s take on the Bombay film industry in her Starry Nights had become a runaway success and recently it was named by Penguin India among its 25 best books to mark its silver jubilee. Though Shobhaa made no reference to any actress in particular in the book, the readers quickly discerned an invisible line linking the tale of the dusky Asha Rani with the evergreen diva Rekha. The book still awaits a screen adaptation and Shobhaa is willing to pick her choice from the current heroines to play Asha Rani. “It would have to be Sonakshi Sinha. She is voluptuous, talented and seductive. Just like Asha Raani. Vidya Balan would be superb as well,” she says.
Indian cinema has come up with many brilliant political films over the years and though Shobhaa says she thoroughly enjoyed Prakash Jha’s Rajniti, she picks the Marathi classic Simhasan, directed by Jabbar Patel, as her personal favourite. Having said that, Sethji is already making rounds in the film circles and there are adaptations in the offing. “I have had two serious offers – I am looking at all options. Sethji is very visual, very cinematic. It is almost made for the movies,” says Shobhaa, who is already able to visualise either Amitabh Bachchan or Sanjay Dutt as Sethji.
Ask Shobhaa to pick her favourite politician, she seems to be unable to come up with a tangible answer. “I had my hopes pinned on Akhilesh Yadav. But he turned out to be a huge let down,” she says, her disappointment quite evident. With shady deals, scams, exposes and an uninhibited display of shamelessness by the Indian politicos, one may say, that the Indian voters today are a disenchanted lot. “The scenario looks pretty grim right now. But extraordinary circumstances throw up extraordinary people. Who knows what might happen in 2014 when India goes to the polls,” says Shobhaa, her guarded optimism marking the note to sign off.
(This appeared today in Chic, The Times of India)