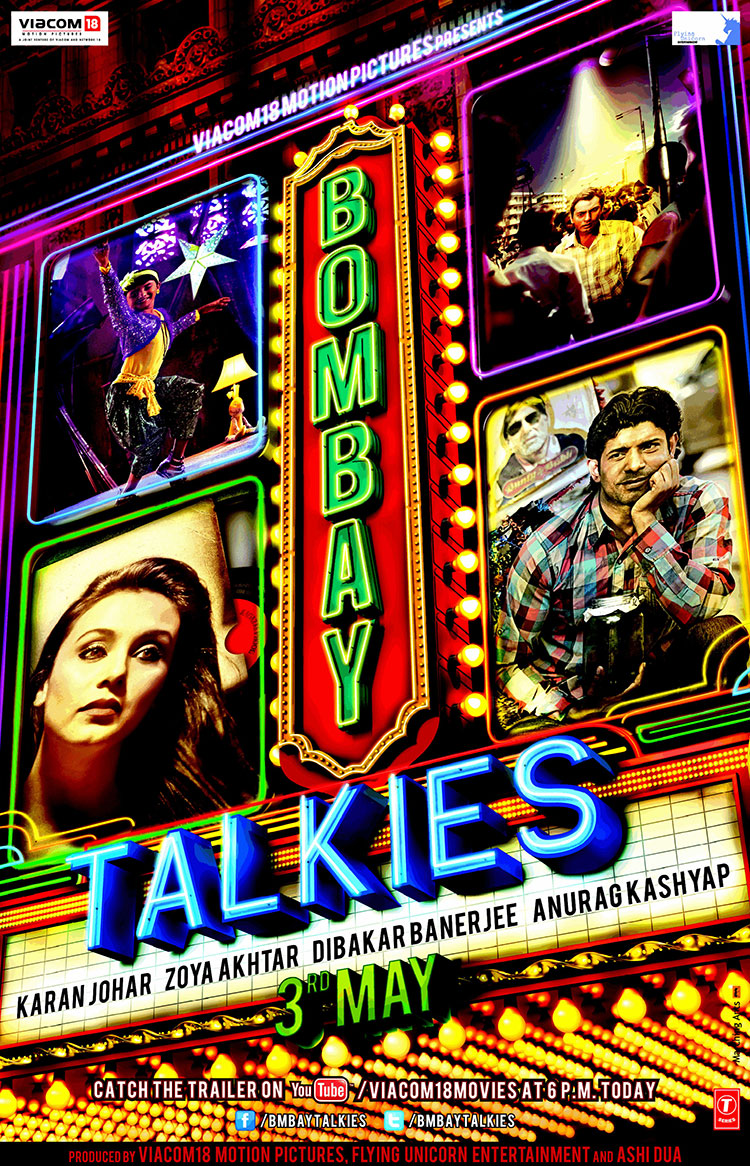 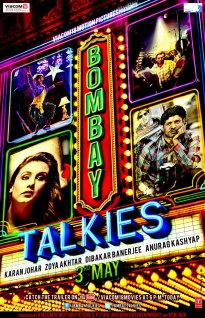 On May 3, 1913, Dhundiraj Govind Phalke released India’s first feature film Raja Harishchandra in Bombay and marked the genesis of the largest film industry in the world. Exactly 100 years later, four leading filmmakers of the day have come together to pay a tribute to cinema in an anthology titled Bombay Talkies, named after the studio started by Himanshu Rai and Devika Rani in the 1930s, which launched legends like Ashok Kumar, Leela Chitnis, Madhubala, Rak Kapoor and Dilip Kumar.
The first film, titled Ajeeb Dastaan Hai Yeh, is directed by Karan Johar. It dwells upon the impact of Hindi film music on our lives and stars Rani Mukherjee, Randeep Hooda and Saqib Saleem. Karan plays on the theme of homosexuality and uses two songs – Ajeeb dastaan hai yeh and Lag ja gale – composed by Shankar Jaikishan and Madan Mohan respectively, to show the unhappy lives of three individuals involved in the business of making news. Karan comes out of his comfort zone to come up with a fine work, which however falls short of capturing the enormity of Hindi film music.
The second film, Star, directed by Dibakar Bannerjee, is based on Satyajit Ray’s Patol Babu and shows one day in the life of a failed actor Purandar, who serendipitously hogs lime light for a few moments as an extra in a shot. Nawazuddin Siddiqui excels in his part as Purandar and owns it completely. Dibakar also captures the hysteria that surrounds a film star and the adoration bestowed on them by the masses, using the example of Ranbir Kapoor in this case. The movie is a tribute to the siren-like charm of the tinsel town, which makes and breaks dreams, but gives a hope to continue dreaming at the end of the day.
Cinema influences us like no other medium and while some of us have realised our dreams through the characters on screen, some have taken a leaf out of the lives of their idols on-screen to become like them. This is the idea behind Zoya Akhtar’s film Sheila Ki Jawani, which brings out the conflicts of a school boy, who, much to the chagrin of his father, aspires to become a dancer one day. Zoya fills this piece with innocence and a sense of freedom, celebrated through Katrina Kaif’s item number Sheila ki jawani.
The fourth film, titled Murabba, is directed by Anurag Kashyap and throws light on the deification of film stars in our country. A dying father asks his son Vijay (the most popular screen name of Amitabh Bachchan in the 1970s) to get the superstar eat a portion of a murabba made by his wife and bring the rest of it home for him. He believes that eating the leftover murabba would cure him of his illness. Paying homage to the God-like status achieved by superstars like Dilip Kumar and Amitabh Bachchan, this tragic comedy is about the persistence of a fan to get darshan of his idol.
The film ends with the celebratory song Apna Bombay Talkies, which encapsulates the fun, frolic, drama, action, romance and the stars of Hindi cinema. While all the four films have their high points, it is tad disappointing that the format of all these films shuns the formula of a commercial Hindi film and there is nothing in it for the perennial Hindi film fan, who has played the most important role in the success saga of this industry. But this is also a moment to look back at a phenomenon called cinema, which has propelled the desires, dreams, hopes and aspirations of millions of Indians over the last century. Bombay Talkies is a commendable effort, though Hindi cinema could have had more to its credit.

4 thoughts on “An ode to Bombay cinema”