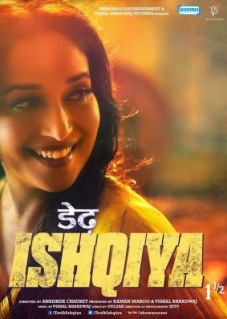 A major challenge faced by most script writers while coming out with a sequel is that they have to dish out something that will retain elements of the old and yet, will captivate the audience with something absolutely fresh. Abhishek Chaubey’s Ishqiya had a finely written script, street smart humour, strong characters and some wonderful songs. Retaining many of these elements, Dedh Ishqiya is the first hit of the year and what a pleasant way to start off!
Dedh Ishqiya  brings back Ifteqar (known as Khalu, played by Nasseruddin Shah) and Babban (Arshad Warsi), who land up in another mess while finding crooked ways to make easy money. They steal an expensive necklace from a store and many adventures lead them to a poetry symposium being organised by Begum Para (Madhuri Dixit), the widowed begum of Mehmudabad, who will marry the best poet from the gathering. Ifteqar sees a good opportunity to spend the rest of his life there in peace and Babban takes wildly to Begum’s maid and confidante Muniya (Huma Qureshi). But beneath all this facade of poetry, the imposters fall in deep trouble, not before they cover the seven steps of love.

Nasseruddin Shah and Arshad Warsi maintain the momentum of their chemistry seen in Ishqiya. The only other pair that which has ticked off well in popular imagination is that of Munna and circuit in the Munnabhai series. Their fun, repartees and insecurities bring in plenty of homourous moments. It is wonderful to see that Shah lets the talent of his female co-stars come to the fore, be it in Ishqiya, The Dirty Picture or Dedh Ishqiya. Actors like Vijay Raaz and Manoj Pahwa, who seldom get roles they are worthy of, shine through the film.
There are two things you should thank the makers of Dedh Ishqiya  for having brought back to cinema – Madhuri Dixit and the genre of Muslim social. Madhuri dances like a dream to the steps of Pandit Birju Maharaj’s choreography, who has worked on the wonderful kathak piece Jagaye saari raina. As the Begum who takes to dance after ages, Madhuri springs like a bird freed out of her cage. She finely balances the coquetry of a courtesan with the elegance of an aristocrat, seasoned with oodles of humour. Watching her you wonder how her talent was largely wasted by filmmakers in the 1990s. To complement her at every step is Huma Qureshi, whose comic timing and brazen acts are a joy to watch. It’s heartening to find a beautiful story on female bonding, which has rarely been explored in Hindi cinema. In Ishqiya , Vidya Balan stole the thunder from the very talented Arshad Warsi and Nasseruddin Shah. Even in the sequel, the women are the real show stealers.
The Muslim social genre once ruled the roost with movies like Chaudhvin ka Chand, Mere Mehboob and Mughal-e-azam in the 1960s. The genre waned by the end of 1960s and Kamal Amrohi’s Pakeezah was its last fort of its glory. In the later period, the attempts towards revival with MS Sathyu’s Garam Hawa, Muzzafar Ali’s Umrao Jaan and Sagar Sarhadi’s Bazaar were rather scattered. But these were flash in the pan appearances and the genre was almost dead. But Dedh Ishqiya has given a glimpse into that genre once again. There is an element of hiraeth in it, a longing for the past, which surfaces throughout the film. Begum Para tries to uphold a culture that has few takers today. There is a hint of movies like Satyajit Ray’s Jalsaghar, where the old world zamindars create an atmosphere of the bygone world in their private space for their psychological satisfaction. But the era has ended and as we see it, Begum Para knows it too well.
Like his previous films, Vishal Bhardwaj has given music that blends well with the story. What is notable about in Dedh Ishqiya is the inclusion of some of the most memorable ghazals of Begum Akhtar, one of the greatest ghazal singers of the 20th century. What better way of evoking the milieu of a bygone era than entreating us to gems like Woh jo hum mein tum mein qarar tha and Hamari atariya pe. Vishal Bhardwaj proves his mettle as a dialogue writer too. Listening to those repartees and couplets in chaste Urdu is sheer eutony.
There are loose ends in the script. Why did Begum stop dancing? How did Ifteqar know her during his teenage years? Did they have a strong relationship and did the Begum really love him? Abhishek has given this peek into their past and it leads to nowhere, ending up as an unnecessary distraction. The women do not have as strong a back-story or a finely layered personality as the protagonist Krishna (Vidya) did in Ishqiya.
Sometimes you wonder how can no-brainers like Chennai Express and Dhoom 3 make money in billions, while a movie like Dedh Ishqiya, with all the elements of a quality entertainer, doesn’t get a blockbuster opening. But history decides which film is worthy of being watched over and over again and when that stock is taken years later, Dedh Ishqiya  will not find much trouble fighting for a space. Madhuri’s charm, its lilting music and the bravura performances will only endure with time.

7 thoughts on “The charm of Dedh Ishqiya”