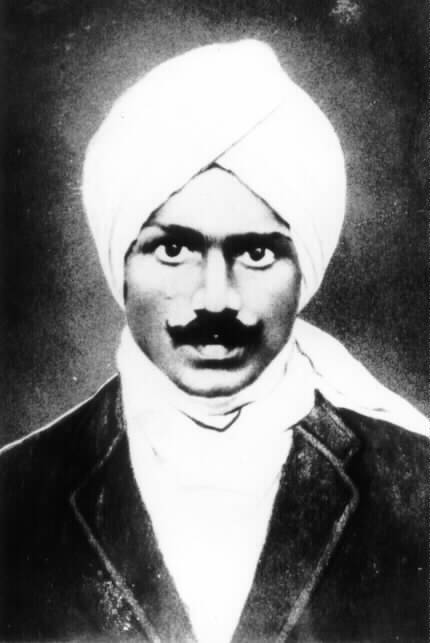 It’s been more than 90 years since Subramania Bharati passed away. He found some acclaim while he was alive but it was only after his death that the world understood his genius. Today, his works are being brought under one roof with the efforts of his granddaughter and great granddaughter, who are making all efforts to keep his legacy alive. I spoke to them over the phone two months back.

Mira Sundara Rajan is quite elated as she speaks from Canada about her great grandfather Subramania Bharati. A lawyer and musician by profession, Mira, along with her mother (and Bharatiyar’s granddaughter) S Vijaya Bharati, brought out the first complete authentic version of Bharatiyar’s works recently. For them, it was an important part of maintaining the legacy of the legend.

By the time Bharati died at the age of 38, in 1921, he had left behind a treasure trove of prose, poetry and philosophical texts, which would go on to spark a zillion revolutions in the country. For Vijaya and Mira, a major preoccupation has been to restore the glory of the poet’s works in its complete authentic glory.  “After independence, there was a lot of interest around the works of Bharatiyar and the government wanted to make his works accessible to the masses. Suddenly, a lot of publishers took over his works and in that haste, many poems which he didn’t write were also attributed to him. We felt that there needs to be a standard edition of his works as the earlier editions violated the author’s moral rights of attribution and integrity in protecting our literary heritage,” says Mira.

So why were the works of a great man like Bharati tampered with? Mira likes to believe that these changes wouldn’t have been wilful. “They were rather a result of carelessness. To think of it, most commercial publishers weren’t literature experts and in a newly independent nation, ideas about scholarship hadn’t developed fully. In fact, there was one writer who decided to bring out Bharatiyar’s biography and travelled through towns and villages where Bharati had lived in. In the end, he just brought out his own version of Bharati’s life, without crosschecking with his family or close associates,” says Mira, citing examples of poor scholarship with respect to researches on Bharati.

There have been many stage and film adaptations on the life of Bharati and the family was also contacted on many occasions by filmmakers to get details about the life of the freedom fighter. “A huge problem has been with the portrayal of Chellammal, his wife, who was a heroine in his scheme of poetry. A recent film on Bharati showed her as a very docile woman but she was seen by Bharati as his Kavitai Thalaivi, the chief of his poetry. Though she wasn’t educated, she was a very intelligent woman and knew all his poems by merely listening intently to him. She valued his poetry and had many of his unpublished works with her,” says Mira.

No one else can be a proof to these facts than Vijaya, who saw Chellammal from close quarters during her childhood. “My grandmother brought me up till I was 18. She was 32 when Bharati died and only had her brother Appadurai to support her. She wanted to publish the works of Bharati after his death and sought financial help from the public. People sent Chellammal money to publish the works of their favourite poet and that’s how she published two editions of Bharati’s poems. Her brother Appadurai and brother-in-law Vishwanatha Iyer together began a publishing business and when Chellammal needed money to marry off her second daughter, she sold the copyright of Bharatiyar’s works to Vishwanatha Iyer for Rs 4,000. She also got a pension of Rs 30 from the newspaper Swadeshamitran. In 1949, the government of Madras took over the copyright of Bharati’s works and gave it to the people of Tamil Nadu.”

Mira is also working to make Bharati’s works available in English and other languages. “A problem in translating the works of someone like Bharati is that his poems are replete with imagery of south Indian culture, which might not fit in the western world view. But then, his ideas hold a universal appeal. Like Shakespeare, he wrote about experiences common to human condition. It is a style that is accessible and involves all elements of human personality. This is one reason why his works find resonance across art forms like music, dance and theatre,” says Mira.

As one discusses Bharati, one cannot quite miss discussing his illustrious contemporary Rabindranath Tagore. In fact, Bharati also praised Tagore for having popularised Indian ideas across the world. “Tagore came from a wealthy background and his friendship with WB Yeats helped him publish Gitanjali in English. Bharatiyar had a world view which was similar to that of our ancient rishis. In that way, with his foot firmly grounded in contemporary realities and his philosophy transcending barriers, he was like a modern rishi. His study of vedic literature is exhaustive and he believed that divine powers can be captured in a human body and mind. Someday, the world will understand the true genius of Bharatiyar,” says Mira.

(This article appeared in The Times of India today)

One thought on “An ode to Bharati”