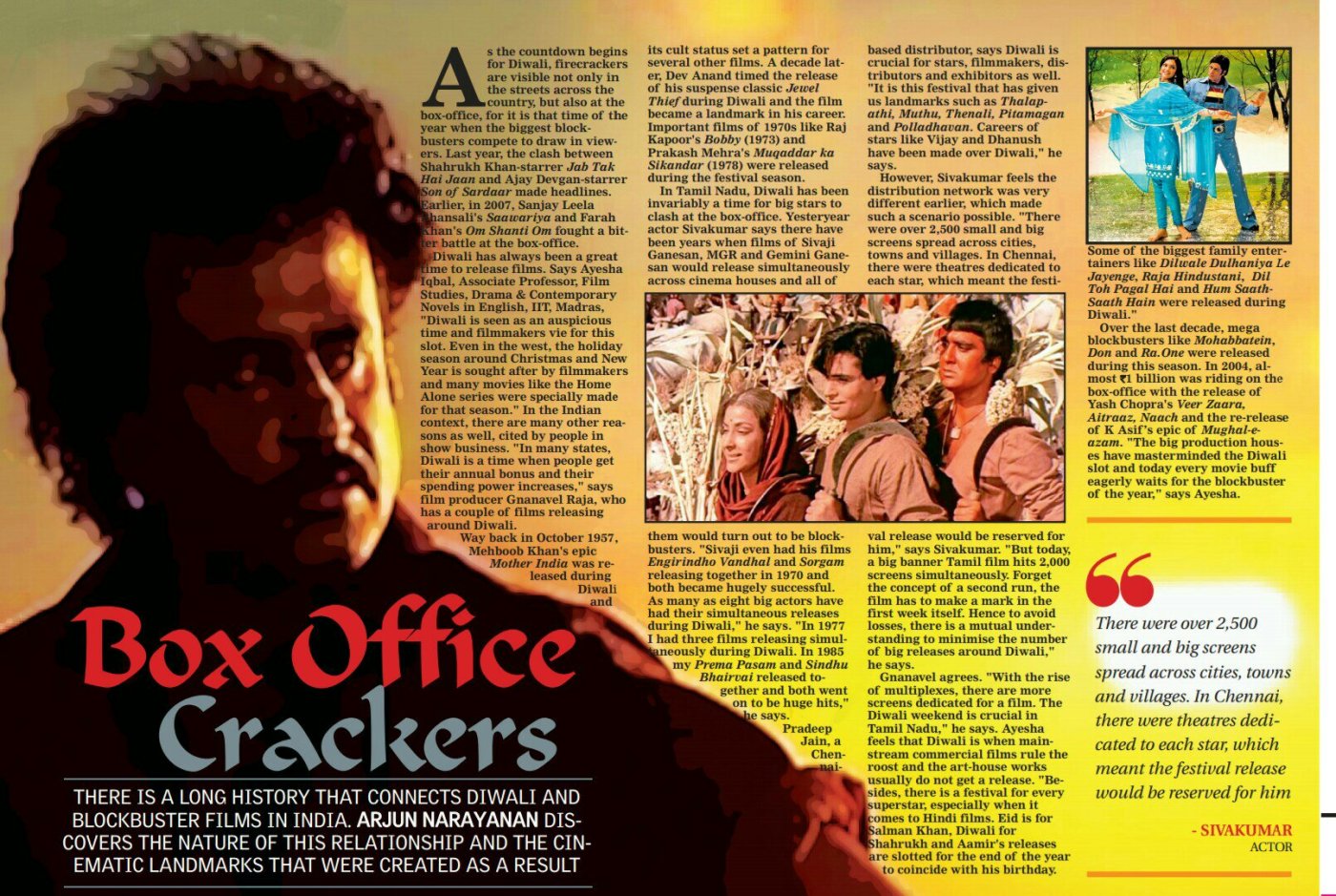 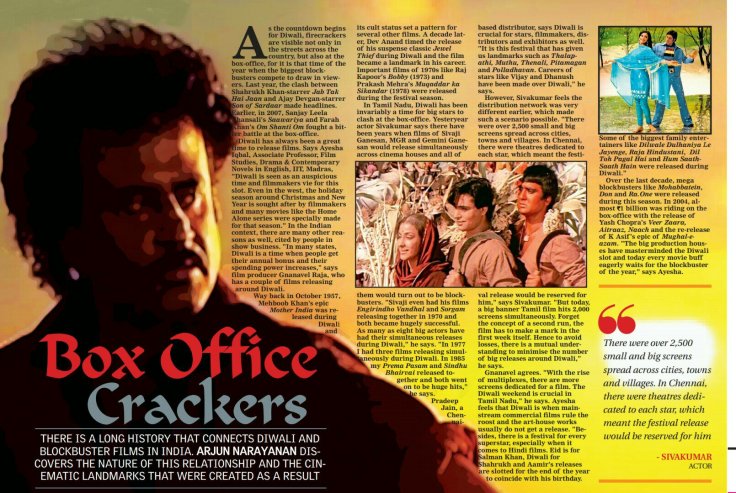 This story was published in The Times of India in 2013

On a busy junction on the Mount Road, in Chennai, Shanti Theater is gearing up for the upcoming festive season. K Bhaskar, the cinema operator of Shanti Cinemas, is quite used to activities happening at a frenetic pace at this time of the year. He has seen 18 Diwalis come and go in this 53-year-old theatre, which is owned by the family of the legendary Sivaji Ganesan. Many superstars and filmmakers have seen their fortunes being made in theaters like these.
Stealing a few moments, as he sifts between umpteen registers and papers, Bhaskar talks about films at the time of Diwali.“There is something about this festival that sentiments go high at this time of the year. There is a positive ambience all around and there would be a buzz around cinema houses, big and small,“ he says. Bhaskar has seen people queue up from 8am to buy tickets.“Three was a time when as many as 10 films would release simultaneously for Diwali. There wasn’t the system of online booking then and it was a carnival outside the cinema halls, with fans bursting crackers, huge cut outs being placed outside and ablutions would be performed with milk on it. Movie releases have always added an extra zing to the festival of lights.“

Even today, theatres like Shanti have maintained the ambience of celebration with cut-outs towering over the theatre complexes, reflecting the larger-than-life nature of cinema. Right from the time advance bookings were open, tickets would fly off the counter a week in advance and seats would seamlessly fill-up in a theatre with a capacity of 1000 seats. “The fan clubs have been very active in the south and have ensured a good opening for many films. Back then, after a show got over, people would queue up again at the counter to buy tickets for the next show. This phenomenon could be ascribed to the star-driven system. Today, the audience is quite driven by a good story,“ he says. While movies released only in fewer theatres before, today, any big blockbuster released in more than 1,000 screens across the country.

What’s common between Haridas (1944), Mother India (1957), Aradhana (1969), Thalapathy (1989) and Dilwale Dulhaniya Le Jayenge? These films changed the fortunes of the filmmakers who brought them out and the stars who sold us dreams. But another thread that connects them all is Diwali. Films and fortunes are made at the box office over this festival.

So there were films like Raj Kapoor’s Sangam (1964), which ran through two Diwalis, crossing 800 days in a theatre in Chennai and more recently, there was Rajnikath starrer Chandramukhi (2005), which ran unabatedly for 824 days! Haridas (1944), starring M K Thyagaraja Bhagavathar, was a Diwali release, which ran for 133 weeks, till the Diwali of 1946. In Kerala, the biggest blockbusters come out during Onam and Vishu, whereas, in Andhra Pradesh, it is during Pongal that the big releases happen. In Tamil Nadu, it happens during Diwali and Pongal.

An old register is drawn out, its pages yellowing with time which list out names of movies that made fortunes during the festival season in Chennai. When Shanti cinemas began operations in 1961, it was A Bhimsingh’s Pava Mannippu that raked in the moolah during Diwali, though the film had released in the month of September and ran for 177 days! Another Diwali release, Pasamalar ran for 175 days. Malayalam movie Thacholi Ambu completed a 100-day run. Diwali, in India, can be compared to Christmas in the west, as many major blockbusters release around that time.

Many old single-screen theaters, which were temples of cinema have been revamped to become multiplexes. But occasions like Diwali bring back the old moments. Devi Cineplex, in Chennai, is into its fourth decade. Old timers say that when MGR-starrer Rickshawkaran was released here, fans queued up to the Anna statue, on Mount Road. Praveen K Mohanram, its Executive Director, says that technology has changed the way people watch film. “The rush for watching a film is still there but the format has changed. The first weekend has become the focal point of collections. The parameter is not 100 days, even for a Diwali release. The excitement is still there but has taken a new form,” he says.

The final list of Diwali releases is being drawn. Yet another carnival is set to begin.