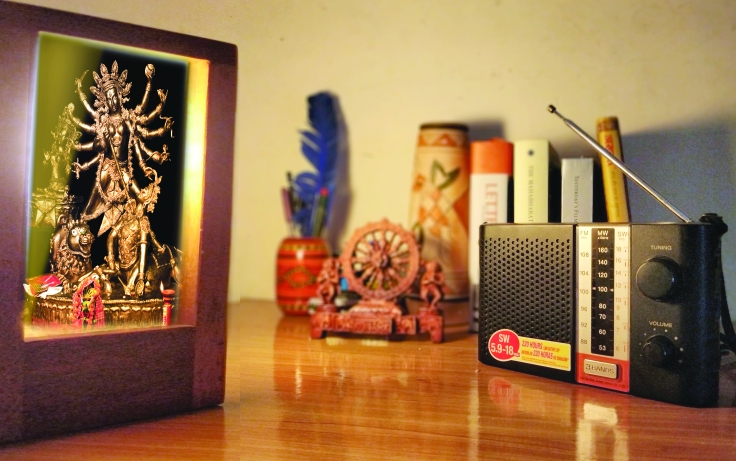 Autumn marks a major turn in the cycle of seasons. In the Hindu calendar, Mahalaya marks the beginning of the Devi Paksha and the end of Pitr paksha. It also signals the arrival of Navaratri.

In many parts of India where Shaktism is a popular cult, the reading of Devi Mahatmyam is common in many households and temples. Many stories of Durga known today are taken from the Devi Bhagavatam and the Devi Mahatmyam (also called Chandi Paath). A popular image of Durga that has endured over time is that of the vanquisher of Mahishasura. This imagery of Durga was captured by Adi Shankara in the Mahishasuramardini stotram.

In 1932, the All India Radio (AIR) conceived the idea of broadcasting a special programme for Navaratri called Basanteswari. From the Navaratri of 1936, this 90-minute programme went on air and a year later, the programme was named Mahishasurmardini. The script for this was written by Bani Kumar and its music was composed by the legendary Pankaj Mallick (Basanteswari was composed by RC Boral). The narration (paath) was done by Birendra Krishna Bhadra, who worked in the drama department of AIR. Perhaps, this gave Mahishasurmardini an operatic feel. Today, it is one of the oldest active radio programmes in the world.

Noted artiste Revathy Sankaran, who spent many years of her life in Calcutta, has vivid memories of waking up to the programme on the day of Mahalaya. “For more than five decades, I have welcomed Navaratri by listening to Mahishasuramardini by Birendra Krishna Bhadra. Back then, radio was the main source of entertainment and we would wake up without fail before 4am to listen to the Mahalaya programme on AIR. Some of the greatest artistes of that time were a part of this programme. Their voices touched your soul,” says Revathy as she hums a few lines of the invocation.

“In the first part of the Chandi Paath, as the singers woke up the Goddess saying Jaago tumi jaago, you really felt the world waking up around you. The narrative took you through different episodes of the Devi Mahatmyam such as the killing of Madhu-Kaitabha and the fierce battle of Durga with Mahishasura. The entire neighbourhood would be awake at that time and all the homes had a radio set. People would sit before it, almost meditative and when the programme got over after one-and-a-half hours, the day would have begun. Even today, living in Chennai, I tune into the radio to catch the programme on the day of Mahalaya amavasya at 4am,” she says.

Several musicians who played along were Urdu-speaking Muslims who might not have followed the Bangla narration of Birendra Krishna Bhadra. But Birendra’s narration was such that musicians gathered from its intensity the dramatic moments and played accordingly. All the artistes reached the radio station past midnight in traditional attire for the show and incense sticks were lit and the conch shell was blown before the recording began. The studio became a temple for those few hours and so did the homes where people listened to this live.

In the Chandi Paath, different aspects of Durga come to fore. She is the cause of creation. She nourishes it and enables it to function. She is also the destroyer when the rules of dharma are violated. She manifests as Lakshmi, showering prosperity and happiness. The text is a celebration of the feminine power of this universe.

In 1976, in a drastic move, AIR decided to revamp the programme and invited the reigning Bengali superstar Uttam Kumar to narrate the Chandi Paath (the programme was called Durga Durgatiharini) and Hemanta Mukherjee to compose the music instead of Pankaj Mullick. It ended up being a damp squib with AIR being forced to revert to the older version from the next year onwards.

Soubhik Ray, a city-based marketing professional remembers several autumns spent in his hometown Siliguri listening to Mahishasurmardini in the 1990s. “The kids would be woken up at 3:45am and every home had its own gathering. Later, when I studied at the Ramakrishna Mission school in Purulia, we would listen to this programme in our hostel corridor. It signalled the arrival of Navaratri. Since this was broadcast on radio, Birendra Krishna Bhadra added a lot more dramatics to it to make it more impactful. In the late 1990s, they made a show with Chandi Paath on TV with actors performing various roles. But the narration in the background remained of Birendra Krishna Bhadra.”

Today, the artistes who put this show together are not alive anymore but the magic refuses to fade away. Across the country, Mahishasuramardini is played on radio without fail on the day of Mahalaya Amavasya at 4am. “I almost know it verbatim having heard it every year. The bhakti of the singers is what makes it alluring to this day. It will remain so,” says Revathy.

(This story was published in The Times of India today)